Wildlife conservationist and TV host Jeff Corwin spoke to students and faculty of Youngstown State University in a private session before his community lecture at Stambaugh Auditorium on Oct. 4.

Corwin’s lecture was a part of the Skeggs Lecture Series presented by YSU.

The private session was set up in an open question and answer format that gave audience members the chance to ask the conservationist some questions that would normally not be touched upon in a lecture. 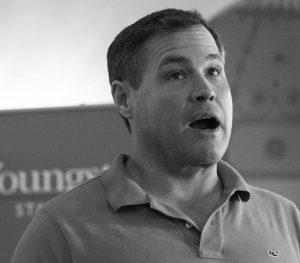 Corwin discussed how witnessing people badly manage nature, along with his love for nature, inspired him to be a conservationist.

The discussion centered around conservation and the Earth changing due to pollution and the effects of global warming.

Corwin discussed multiple bills currently traveling through Congress that deal with lessening pollution restrictions on companies, denying recognition of endangered species from other countries and weakening the Environmental Protection Agency.

“If we have learned anything from the very divisive, bitter political environment we are in now, no matter what you think, we are all under this stifling umbrella,” Corwin said. “So, what can we do in our lives to make a positive change?”

Corwin said it is essential to be aware, look at both sides and get involved at every level which includes in the field and politically.

Landon Durda, a YSU student and attendee of the lecture, said he was excited for the opportunity to listen to Corwin.

“I grew up watching ‘The Jeff Corwin Experience,’ and I never get the chance to actually talk to somebody who has such a vast spectrum of what they cover and the situations they’ve been in,” Durda said.

He said Corwin’s public approach to conservation has taught him how to balance business and biology as a career path, both of which are Durda’s majors.

“I like Jeff Corwin and Neil deGrasse Tyson because they are able to put complex ideas into simpler terms,” Durda said. “I came here to listen to what he had to say about the current situation we are in politically and environmentally.”

Paige Beaver, a pre-vet med student at YSU, said she attended the lecture for a class, but would have done so anyway because of the subject matter.

One thing stayed consistent throughout the lecture: how can people become a conservationist?

Corwin offered ways to help conserve wildlife and the environment, such as calling your congressmen about legislation and avoiding face washes containing microbeads. There is always a way to help, he said.

“There’s no good guys or bad guys in the end. If there is someone held accountable, it’s us for not exercising our power,” Corwin said.