After a bye week, the Youngstown State football team (2-1) will hit the ground running as it enters Missouri Valley Football Conference play. This week, YSU goes up against the 4th-ranked South Dakota State University (3-0) Jackrabbits.

YSU closed out its nonconference portion of the schedule last week in a blowout 59-9 win over Central Connecticut State University (1-3).

In its previous outing, the Penguins’ ground game managed to run the ball for eight rushing touchdowns scored by six different YSU players. The defense, meanwhile, held CCSU to just one touchdown and a lone field goal late in the game.

Last week, the team got a well-deserved break before getting back on the field for practice in preparation for the next game.

Coming off yet another stellar performance, running back Tevin McCaster spoke towards the positives of having the week off.

“We have gotten a lot of extra practice,” McCaster said. “We were to watch a lot of film on SDSU and we were able to benefit from rest.”

YSU Head Coach Bo Pelini said he hopes the extra preparation will help give them the jump over SDSU.

Heading into this week’s game, offensive tackle Justin Spencer expressed the team’s excitement over their next matchup.

“After CCST, it’s all we’ve been thinking about. It’s not often we get a Top-5 matchup,” Spencer said. “It’s ‘do or die’ now. There’s never an easy game in our conference, so you have to attack it like it’s the top team you’re ever gonna play. There’s no room for mistakes now so we have to play our best football.” 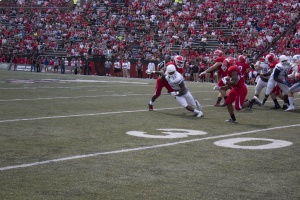 McCaster reiterated that sentiment hoping to correct the team’s past struggles against SDSU.

“The key will be to get off on a good start,” McCaster said. “Last year they got up 14 to nothing on us in the first quarter so it’ll be great for us to get off to a good start and we will.”

In the last meeting, YSU turned the ball over twice with SDSU capitalizing off both turnovers with scores. The Penguins went on to lose that game 24 to 10 on the road. YSU’s only scoring drive came late in the fourth quarter.

“We can’t give them those points. We have to be better to begin the game and continue to progress as the game goes on,” Spencer said.

For seniors, such as linebacker Lee Wright, this game holds an extra sense of importance. In his playing days at YSU, the Penguins have yet to beat SDSU.

“I take things like that personal,” Wright said. “Coach [Pelini] talks about it every year, this is a game he looks forward to and we look forward to it too.”

As a leader on defense, Wright stressed the important role the defense will play in a game he expects to be physical.

The defense will have its work cut out for them going against a team that has scored an impressive 31 points per game this season. Their team is coming off an 51-10 victory in their previous game against Drake University (2-2). SDSU’s high powered offense has also managed to outscore opponents 92-17 in the first half.

“They can hurt you in a number of different areas,” Pelini said. “So therefore you have to be on point. We’ll prepare hard this week and hopefully develop a game plan to compete at a high because that’s what it’s going to take.”

For Pelini, he’s still looking for the team to do the little things as he searches for success in the details.

“We’re able to identify some areas we can get better at and things we can do well and then try to continue to work on those things,” Pelini said. “Saturday will be a good test for us and for SDSU, you learn a lot from your football team in a game like this.”

Pelini also gave an injury update on players, more notably quarterback Hunter Wells who has been cleared for this week’s game coming back from a shoulder injury.

Youngstown State will clash with South Dakota State University this Saturday as they hope to continue their September home win streak on Sept. 30 at 7:00PM at Stambaugh Stadium.