Youngstown State University graphic and interactive design professor R.J. Thompson received an award for his work on the City of You campaign.

The Ohio Economic Development Association selected the City of You as its winner for medium-sized communities. For Thompson, the recognition and award is critical to supporting and growing efforts for the City of You platform to succeed in the short term and long term.

For several years, Thompson said Youngstown lacked a branding or marketing communications platform. He said the city, as well as YSU, hired his graphic design program Youngstown Design Works to produce a publication that collected data from a two-year $250,000 federal grant.

He drew inspiration for storytelling while his wife was being tested during her pregnancy two years ago, Thompson said. 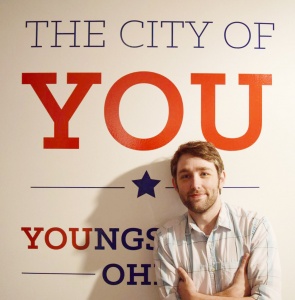 “I was feeling particularly sentimental, in the sense that I was now going to be a new father and that my daughter’s life was totally supported by my wife,” he said. “I drew parallels between that and how the people of Youngstown give the city its life and its will to progress forward.”

Thompson said he no longer refers to City of You as a campaign, but more of a platform since there is no end planned for the work.

“The City of You rebranding and communications platform is built to represent the progress currently occurring in Youngstown,” Thompson said. “It also represents the progress that will continue into the future by best representing the stories of the people who live, work, play and learn in Youngstown and how they’ve contributed to the city’s renaissance in their own special way.”

A few years back, when the platform was introduced, Thompson didn’t believe the response and the support from the city would be as great as it has been.

“My initial expectations were that maybe they would formally adopt the artwork that I have created for them,” Thompson said. “Ever since that point, though, all of the opportunities provided to me have been incredible, surprising and always taken with total enthusiasm and responsibility.”

Michael McGiffin, the downtown events and citywide special projects director, said the platform encourages the residents of Youngstown to be the best version of themselves.

“The campaign acts as a little bit of a cheerleader for the people who reside in Youngstown,” McGiffin said. “It’s an uplifting campaign that allows the people to let their voices be heard and their stories to be told.”

Jim Freeze, the executive director for Youngstown Area Goodwill Industries, said the City of You has undoubtedly influenced change for the community.

“I love Youngstown. It’s definitely an exciting time for the city since a ton of interesting things are happening now that weren’t happening years ago,” Freeze said. “We [Goodwill] have been operating in the city for 125 years, so we want to be a part of the city creating a positive impact.”

Starting this week, Freeze said Goodwill is selling City of You shirts to spread the message around town.

According to Thompson, the platform has the physical ability to plan and promote special events throughout the city, but it is mentality that leads to great things happening in Youngstown.

He said the work has been a blessing and the people of Youngstown make it all the more worthwhile.

“I consider this work an honor to do,” Thompson said. “I’ve made many friendships throughout this work, and I feel a level of connection with Youngstown and its citizens that inspires me to push the platform forward and ensure its continued growth and success.”