In recognition of the donation, YSU will name the athletic facilities west of Fifth Ave. across from Stambaugh Stadium the Covelli Sports Complex. The Covellis were honored at the YSU game against South Dakota State University on Sept. 30.

YSU President Jim Tressel said the donation is a component of the university’s campus beautification project and will help to upgrade facilities, as well as enhance student experience. 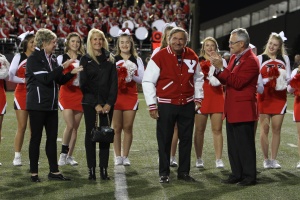 “We have continued to seek upgrades and are continuing our project to enhance the area west of Fifth Ave.,” Tressel said. “The donation is both a part of athletics and student experience and will hopefully allow us to create a beautiful complex.”

Tressel continued by expressing his optimism about the campus beautification project and how the Covelli family’s donation will be utilized.

“I think some of the money will go to aesthetics,” Tressel said. “We have on our wish list to create an indoor and outdoor athletic tennis center. The area [west of Fifth Ave.] is something we’ve dreamed about upgrading.”

According to Tressel, private donations have been critical for the university in creating a campus with a countless number of opportunities for students and faculty to succeed.

“It’s a tremendous opportunity to have gifts like this that allow YSU to have a campus that students, faculty and alumni can all be proud of,” Tressel said.

Last year, the university received $1 million from YSU alum and local businessman Don Constantini to build a multi-media center for the communications department. The building will also be used for game-day activities.

Ron Strollo, the athletic director at YSU, said outside donations are critical and allow the university to not only enhance current facilities, but build new ones.

“The [Covelli] donation is definitely a win-win situation for us,” Strollo said. “It helps us to clean up the area around campus and to keep our enterprise going.”

Strollo said athletics typically receive around $4 to $5 million a year from outside donations, allowing for increased opportunities for not just student athletes, but the university as a whole.

Each year, YSU receives donations from the community, allowing them to create various scholarships for its students and enhance facilities to create academic opportunities.

“You can’t walk more than two steps without tripping over philanthropy,” McFadden said. “We have a legacy of philanthropy that allows us to enhance our students’ learning experiences. We simply would not be the same college without the generous donations from our community.”