President Jim Tressel highlighted the history, impact, progress, campus and future of Youngstown State University at the annual State of the University address on Monday in Kilcawley Center.

During the address, Tressel announced that the university has been reaccredited by the Higher Learning Commission through 2027.

According to a Jambar article, YSU has had continuous regional accreditation since 1945 and received a 10-year reaffirmation in 2008. Accreditation qualifies the university to administer federal financial aid to students and to receive federal grants and contracts. It also supports transferability and recognition of credits earned by students.

There are five criteria that a university must meet to receive or maintain accredited status. Of the five criteria, 21 categories are measured. Tressel announced that in those 21 categories, 20 of them were met and one was met with concerns.

According to a YSU press release, the HLC report noted that YSU “has made tremendous progress in overcoming previous major challenges, most notably in the areas of fiscal health and enrollment.” 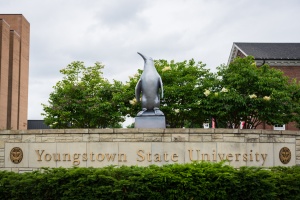 He focused on the progress of the university in advancing students, alumni and the community and stressed that “accreditation is usually the first measuring stick” for progress.

Tressel said the incoming freshman class is the largest class since 2010 — touting record high GPAs and ACT scores. The international student enrollment is at its highest, there has been increased retention, the Penguin Tuition Promise was implemented and the university housing is at capacity.

Additionally, the “We See Tomorrow” $100 million capital campaign has hit the $75 million mark.

Tressel stressed the impact the university has on the five-county area including: a contribution of $923.9 million into the five-county area every year, 15,699 jobs held by YSU employees and graduates, about $3.1 million put back into the community and around 600 YSU student teachers with an economic impact of $4 million each year.

“The impact of this institution is unlike the impact of any of the other institutions in this state, in my opinion and the numbers seem to bear it out,” Tressel said. “It’s certainly a tremendous impact for each and every person that lives here.”

Additionally, the 69,324 community service hours across the campus accumulated an estimated national volunteer value of about $1.7 million, as hygiene students provide 2,500 free appointments each semester and business majors complete 500 tax returns a year through the free VITA program.

When it comes to the campus at its current state, there will be many updates between now and 2019.

The Enclave apartments have opened on Wick Avenue, with the retail portion opening this fall and the new Student Health Center on Lincoln Avenue is set to open in January.

The work for the Constantini Multimedia Center at Stambaugh Stadium has begun, which will house classes for sports broadcasting majors. Tressel also said there are plans for a student recreation field, a tennis and bowling center west of Fifth Avenue, a proposed Fifth Avenue improvement and additional parking spaces.

“The opportunities for the future are exciting, and what excites me is that Youngstown State University can be a leader,” Tressel said.

Mike Sherman, the special assistant to the president, said there is a great foundation for the university to build upon.

“My observation since I’ve been here is that a YSU degree is the most valuable degree in the State of Ohio in terms of the experience students have, the low cost and most importantly the placement opportunities that exist for jobs after students have graduated,” Sherman said.

Sherman said he believes that the institution will create for itself its future.

“That’s why the Strategic Planning Organization Team intends to instigate a process that’s highly collaborative,” he said. “There will be a lot of campus opportunities to be engaged.”

For more information about strategic planning go to https://ysu.edu/strategic-planning. The university is also asking for those in the campus community to “Join in on the Conversation” to provide input.