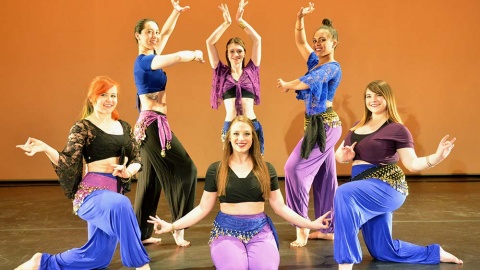 Under the direction of Christine Cobb, the performance will showcase 12 student choreographers and YSU alumna Stephanie Tirdel, who danced professionally in Pittsburgh from 2004 to 2011.

YSU’s Dance Ensemble has been preparing for the 25th annual performance since September 2015 when tryouts were held. Many of the seniors in dance ensemble choreograph dances for the performance.

Alana Lesnansky is an honors student at YSU, a senior choreographer and has been participating in Dance Ensemble since her freshman year at YSU.

“I choreographed the final number of the show,” Lesnansky said. “It’s titled ‘A Night On Broadway’ and is a musical theater piece showcasing three popular numbers.”

The multiple performances will include a diverse selection of dances with a special performance April 16 at 2 p.m. called “60×60.”

“It’s free and open to the public. It’s 60, one-minute pieces choreographed by alumni and students,” Lesnansky said. “Also after the Saturday show at 7:30, there is a structured improvisation featuring both the current cast and the alumni.”

According to Lesnansky, there are a variety of numbers in the show itself, everything from belly dancing to modern to musical theater

Becky VanVoorhis, an YSU senior choreographer for Dance Ensemble, has choreographed a modern piece that was performed at the American College Dance Festival in Michigan and another modern duet co-choreographed with senior Olivia Bartie.

“I have choreographed a jazz dance and co-choreographed the modern dance with Bartie,” VanVoorhis said. “Also, I choreographed a Holocaust piece that we preformed last year and will be preforming again in the 25th annual performance.”

Cobb has high admirations for her students and alumni who have worked hard to make the performance possible.

“I am very proud of our students’ hard work, both as dancers and choreographers, and I am so excited about having alumni return to interface with our current students,” Cobb said. “It is truly a celebration of the legacy left by those who came before, and those who carry on the Dance Ensemble tradition in the years to come.”