A game is not so easy to win when it is simply not a matter of just skill or just chance. 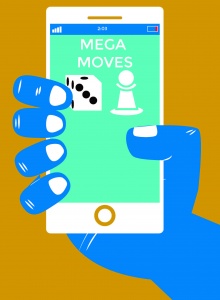 The game, which uses a combination of moves from Chess and Checkers, also uses dice. In the game, the dice roll is split into two separate moves per turn rather than one. The dice are designed with numbers zero to four and the letter “x,” which gives the player an extra roll. After each roll, the game pieces can then move in any direction in an attack and capture strategy.

The last player on the board wins.

“You’re never out of the game,” Kovach said. “You never make a bad move.”

Upon graduating from YSU with an art degree, Kovach freelanced as a graphic designer for game companies. He gained success when he combined cards and dice in his first board game, “Luck Plus”, which was bought by UNO and sold close to 1.5 million units.

In 2014, Kovach worked with Multivarious Games, an APP design company in Dublin, Ohio, to produce the mobile application version of “Mega Moves”. It can be played against the computer, a local opponent or anyone anywhere in the world.

“If this game gets known, it could help put Ohio on the map as far as game developing,” Kovach said.

“The main goal is to create an industry so that people interested in video game and creative tech don’t have to leave and go to the west coast,” Volpe said. “We’re trying to get people connected and support each other. I wanna make sure Ohio is seen as a place for that and I want to make sure that Ohio is able to do that.”

Currently, the video game industry is mostly based in the west coast. By bringing more game development to Ohio, Volpe believes it will generate business in the state.

“We definitely hit on something that gets people excited and want to be involved,” Vople said.

The “Mega Moves” board game can be purchased locally at Kraynak’s in Sharon, Pennsylvania, Cards and Collectibles in Boardman or at Peaberry’s in Canfield for $15. The application can be downloaded for free in the Apple store on iPhones or iPads.