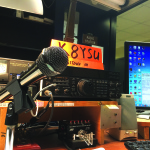 They comprise the Amateur Radio Club, tucked away in a corner on the fourth floor of Moser Hall. An assortment of electronic antennae and computer monitors fill the room.

The club competes in the annual conference, placing against every other station in the United States.

“I’ve communicated with the International Space Station before,” Frissora said. “As long as they’re in your line of sight, you can make contact with just about anyone who is operating a radio.”

Amateur radio’s purpose is to provide a place of experimentation for non-commercial, licensed radio enthusiasts and for professionals in multiple agencies.

The Amateur Radio Club was founded in 2001 during a field day — a test of emergency broadcasting and reporting through amateur radio.

According to Frank Sole, the club’s other faculty adviser, amateur radio technicians are at the forefront of informing local meteorologists, police officers and fire departments of breaking news.

“We are the minutemen of communication,” Sole said.

Frissora said every college student possesses the skills necessary to obtain a HAM radio license. The students in the club have a 100 percent pass rate on their radio technician tests.

Sole said those who become advanced in their skills can launch orbital satellites carrying amateur radio — commonly known as OSCAR. These activities have drawn people to technology some may see as outdated.

“Amateur radio isn’t just for broadcasting,” Sole said. “It has other uses.”

Elias Rafidi, an engineering student and member of the club, said students are not only learning technical skills but also social skills

“The club gives you a different and great way to learn communication,” Rafidi said.