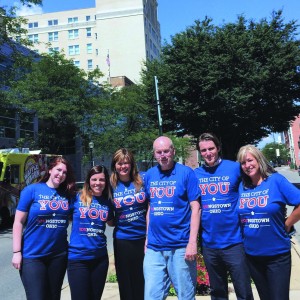 The citywide economic development plan released last week includes a marketing plan that proposes adopting a new logo for the city and branding Youngstown as “The City of You.”

RJ Thompson, director of Youngstown Design Works, presented the campaign when the plan was released. It features a series of banners spotlighting a member of the community and what they are able to do in Youngstown.

“We need to give the people of Youngstown a space to tell their story,” Thompson said. “These people make the city what it is … and the things that they’re doing and they’re creating and building give the city its spirit.”

The campaign highlights the ability to achieve things quickly in Youngstown. Thompson said Youngstown Design Works would’ve taken years to establish in a city like Pittsburgh. He also highlighted the Little Youngstown Cinema, which started screening independent and foreign films over the summer.

“People being able to make these things happen here is a really great point of pride that needs to be communicated,” Thompson said.

Thompson lives in Pittsburgh, and he said as an outsider looking in, he thinks it’s important for Youngstown to have a distinct presence.

“Having a clearly-defined identity gives some personality to the community, to the city as a whole,” Thompson said.

Mayor McNally said he was impressed by the work that Youngstown Design Works presented.

“One of the keys that I wanted to see come out of this was getting away from our corporate seal and trying to come up with an identity for a city of Youngstown,” McNally said.

“I can say that very definitively, the support for it has been resoundingly enthusiastic,” Thompson said.

“We are looking for the community to buy into it on a philosophical and conceptual level,” Thompson said. “I think it’s something that can sort of corral everyone together and make something really great and celebrate the city.”

The campaign allows neighborhoods and organizations to personalize the logo and banners with their own dual color schemes.

He said someone approached him after he presented the plan on Tuesday with a clear idea of what he wanted.

“He’s like, ‘I want green for my neighborhood. I want it to look like this. I want the T-shirts to be green and black. I want this and this and this, and we’ll make it happen.’ And I’m like, ‘Perfect, that’s exactly what we’re looking for,’” Thompson said. “So as long as our friends are able to make it happen, then I believe it will.”

The city has yet to formally approve the campaign, but Thompson said he anticipates a rollout sometime in 2016. He has the support of the mayor and his staff.

The mayor said by focusing on the people of the city, the campaign offers a lot of possibilities.

“We have 65,000 people who live here on a daily basis, plus students up on campus everyday, and there’s 75,000 different ‘Stories of You’ that we need to talk about,” McNally said. “What they’re doing to make their ‘You’ a special experience I think is something that we can really tap into.”

Thompson said he hopes everyone will have their own interpretation of The City of You.

“I want people to look at it and think, ‘The City of You, what does that mean?’” Thompson said. “‘Well, I live here, I’m a contributor, what can I do to give back or make this place better, or through making this place better, am I making myself better?’”