The demanding chants of protesters echoed throughout Wick Park on March 24 as attendees participated in the national March for Our Lives event.

March for Our Lives is a political movement created by student survivors of the mass shooting that took the lives of 17 people on Feb. 14 at Marjory Stoneman Douglas in Parkland, Florida. Some of the student organizers, including Emma González, Delaney Tarr and David Hogg, have become the faces of the movement.

The march was originally planned to take place solely in Washington D.C., but other cities around the world decided to join in in solidarity.

Youngstown organized its own march, which took place at 11 a.m. Protesters marched around Wick Park before gathering at the pavilion to listen to various speakers talk about the issues of gun violence and gun control.

Speakers led the crowd in rallying cries to boost their morale. Some chants included “Enough is enough,” “Remember in November,” “Thoughts and prayers are not enough,” and “Now is the time to talk about gun control.” 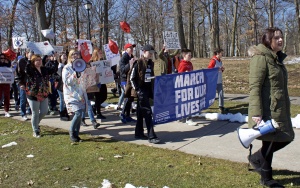 The first speaker was Mahoning County Democratic Party Chair David Betras. He called out lobbyists and executives from the National Rifle Association such as Dana Loesch and Wayne LaPierre for using their “blood money” to buy the vote of Congress.

“You are all armed with something at your hands that is far more powerful than an assault rifle and it is your vote,” Betras said.

He urged people to vote out politicians who the NRA has influenced via monetary campaign donations.

Amanda Daquelente, a language arts teacher at Howland High School in Warren, Ohio, talked to the crowd of protesters about how equipping teachers with guns can create more problems than it will solve.

“One thing we can take from the Parkland students is that we cannot sit behind our computer screens and our cell phones and simply post about gun violence,” Daquelente said. “We need to get involved and take a stand. Use your vote. Use your voice, even if your voice shakes.”

She also discussed how privileged members of society have to take a step back in order for African-Americans and Latinx to have a seat at the table and have their voices heard.

Three Canfield High School students spoke at the rally. Eva Lamberson, Taryn Rothbauer and Melissa Dahman discussed how they created the Committee Against Violence in Schools.

Lamberson said they have drafted a safety proposal, held a public forum among students, participated in a walkout, met with their administration almost daily and attended school board meetings in order to help make a change.

“I am scared. I look at the faces of my peers and I listen to their concerns, and they are scared. We are scared of this constant looming threat of someone taking our lives or the lives of someone we love, while we are just performing the most basic action of our adolescence — getting an education,” Rothbauer said.

Dahman pleaded that increased safety measures and proposals will not suffice when it comes to achieving the change they desire if gun control is not included in the conversation. 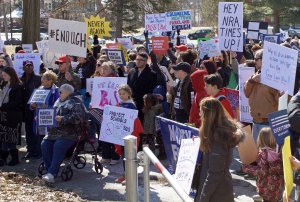 “It shouldn’t be easier to get a weapon of war than Sudafed in this country,” she said.

Carson Markley, a Youngstown State University student, urged that marches and walkouts are not enough. He suggested utilizing the power to vote as a way to enact the change they want to see.

The event also featured a 17-balloon release and moment of silence for the lives lost during the mass shooting in Parkland, which was led by YSU Student Government Association President Rayann Atway and and Executive Vice President Ernie Barkett.