From Nov. 18-20, Movies 8 in Boardman will be showing the Youngstown made film “The Refractor.” 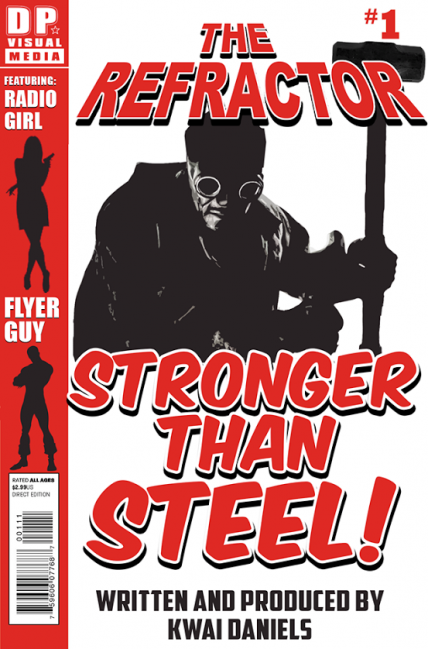 Kwai Daniels, founder of DP Visual Media, is the man behind the film. Daniels wrote, produced, directed and starred in the movie.

“The Refractor” is an action film about Youngstown’s first superhero, The Refractor. The film tells the story of a man who gained supernatural powers after being involved in an explosion caused by the government. He uses these powers to help save people and fight crime.

Daniels said he started the film about 15 months ago. It was not intended to be a full-length film in the beginning.

“It was initially supposed to be just a skit,” said Daniels. “A ten-minute skit for a local business. The Refractor was going to be the hero that saved local businesses from bad marketing.”

Daniels said once they did the first casting call there were so many people who showed up that they had to revise the script. It was then turned into a 30-minute short film and from there turned into a full-length feature film.

“Other people wanted to participate and be involved,” Daniels said. “I have an open door policy; if you’re dedicated, I will work with you.”

This is the first full-length feature film Daniels has done, even though he started his media company four years ago. Most of what DP Visual Media has done in their operating years has been commercials, music videos and live events for local businesses.

Julius Oliver, owner of Kingly Hand Wash and Wax, has known Daniels for over eight years. He said Daniels always does an amazing job with his business’s commercials and he brought that same quality to his first feature film.

“The movie is very well put together,” Oliver said. “Just the way he connected everyone in the movie, from politicians to businesses and regular people, he put the movie together in a very innovative way.”

The film features several local politicians and local businesses. Oliver, who also is a city councilman, is not the only local politician in the film. The film also features Youngstown Mayor John McNally.

Mobile Bail Bonds, another local business, is a sponsor of the film and a location of some of the scenes in the film.

All of the actors and actresses of the film are from Youngstown. Jason “Chip” Chappell, the owner of Mobile Bail Bonds, said he loves the idea that the film is Youngstown based.

“The Refractor” has already sold out tickets for the premiere, which will be a red carpet event.

There are tickets available for the Nov. 19 and 20 showings at Movies 8 in Boardman. Daniels also plans to have several private screening parties after the film shows in theaters and plans to eventually make the film available through Netflix.

You can view the trailer for the film on its website Refractormovie.com.