The Youngstown Cinema is showing its first film of the 2016 season at 8:00 p.m. on April 1. The theater will play “Dr. Strangelove or: How I Learned to Stop Worrying and Love the Bomb” in the lower level of M Gallery at the Erie Terminal in downtown Youngstown, located at 112 W. Commerce St., Youngstown.

Youngstown Cinema hosts three classic films for audiences each month with the aim of bringing film back to the Youngstown area. 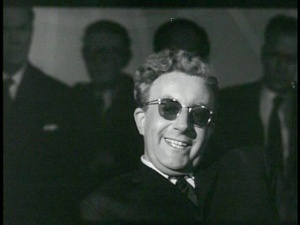 Aspasia Lyras is the director of the Youngstown Cinema. Lyras said she chooses the films to be played, including “Dr. Strangelove.”

“Last year we did quite a bit of foreign films,” Lyras said. “I wanted to do something American, so I picked Stanley Kubrick because he is my favorite director.”

Lyras said she takes the opinions of viewers into consideration when choosing a film as well, and she said “Dr. Strangelove” is no exception.

“It seems to be getting good responses [on social media],” Lyras said. “People seem to be very pleased with the picking of ‘Dr. Strangelove,’ so I am pretty happy about that.”

Weekend shows are $10.00 and weekday shows are $8.00. Presale tickets can be purchased online for the weekend shows for $8.55 through PayPal on Youngstown Cinema’s website, www.youngstowncinema.com.

The theater is co-operated by Richard Elmsworth, who runs the sound technology and helps Lyras organize the films. Youngstown Cinema is also supported and promoted by M Gallery manager Johanna George.

George said the M Gallery is hosting an art opening with a live music performance from 6:00 p.m. to 8:00 p.m. on the same evening as “Dr. Strangelove.”

“We are thrilled to begin the spring movie season the same evening,” George said.

“This year I want to feature someone local for the shorts,” Lyras said.

April will feature short films produced by Sam Goodwill, a local musician who records touring bands that come to the Youngstown area.

In a later month, Lyras said the theater will feature works by Sean Posey. Posey produced short trailers to promote his upcoming novel “Lost Youngstown,” which will be sold at the showing.

“I feel like for what I am doing, I really want the Youngstown connection,” Lyras said.

She said she hopes to draw clearer connections with the film students at Youngstown State as well. Lyras recently met with the film group on campus and said she would like to have film nights to showcase short films that they did.

“It would be awesome to see them grow, and it would be cool to collaborate with them,” Lyras said.

Laura Beadling is a professor at YSU who teaches several film courses. Beadling said she is encouraging her students to attend the showing of “Dr. Strangelove.”

“I definitely think it would be a natural partnership between the Youngstown Cinema and YSU film students,” said Beadling.

Beadling said she would like to see a potential internship for film students at the Youngstown Cinema. She said it would allow the students to understand what it takes to obtain rights and advertise for a community theater.

Youngstown Cinema collaborated with Erie Terminal Place last year, showing one film per month. Lyras said last year’s goal was to introduce the idea and see if people were interested.

Lyras said that she received very positive responses and plans to show more films this year.

Youngstown Cinema will show Danny Boyle’s “Trainspotting” on April 11 and “City Dragon” on April 25, both starting at 8:00 p.m.

Lyras said she would love to see the theater keep expanding, but she would also be content if it stayed the same size with a steady group of supporters to showcase filmmakers’ work.

“Everyone else has an outlet,” Lyras said. “Musicians can play at bars. There’s ways for everyone to have that, but with film you put it up on YouTube and that’s it. I like that the theater can be a way to make it a big deal.”