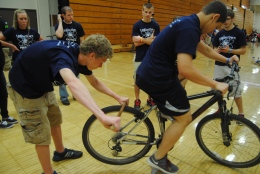 Now employees of V&M Star, Panelmatic Inc. and Swagelok Company, the alumni come back each year to assist high school students in the competition.

“It’s been 25 years, at least,” Scott said. “We really enjoy coming here and seeing the students do what we did a while back.”

More than 300 students and 18 teams attended the Physics Olympics in Beeghly Center on Saturday, and participated in events including the Egg Drop, Mouse Trap Racer and Flying Machine.

“It is really cool,” Blevins said. “You see physics every day, and it is part of everyday life.”

Blevins said she plans to go to YSU to pursue an engineering degree.

Blevins and students built bridges out of balsa wood that had to hold as much water as possible. Blevins said her project took a week and a half to build.

Other events included Physics Phloater, Fermi Question and Hot Water Making. The hot water heater event required teams to be able to heat water by 5 degrees and then to 10 degrees in a 15-minute period.

Students from the Mahoning County Career and Technical Center did not attend this year because of the untimely death of their teacher, Stacey Sutera. The event was in honor of Sutera, because she was involved with the program at YSU.

“These are the types of students that love to build hands-on things with practical and technical education,” she said. “They really don’t know what to expect when they get here, but they end up having a fun day.”

Jason Wemma, YSU post-graduate senior and middle childhood education major, volunteered at the Physics Olympics and said the experience would benefit him. He plans to become a science teacher.

“I think it is cool to see so many kids excited about something,” he said. “I think anytime you’re doing a demonstration — using physics and see it in action — it helps you understand it better.”

Kevin Crowley, creator of the Physics Olympics and adjunct professor of physics, said the event started in 1979 with seven schools.

He and a committee of teachers meet each year to modify events and discuss plans.

“The Physics Olympics keeps the students focused and invested in physics,” Crowley said. “I really wish YSU admissions were here today. It would have been a great recruiting opportunity. They really are the best of the best students in surrounding areas.”

Sue Davis, director of undergraduate admissions, said she didn’t receive any message about the Physics Olympics. Davis said her staff of four recruiters often attends the English Festival and science fairs, but cannot make it to every event.

“I, myself, was working Saturday and doing tours on campus,” she said. “We have a lot of events to go to, but it’s just a matter of getting to all of them.”