Expectations are at an unprecedented high for the Zac Brown Band concert on Thursday at Stambaugh Stadium. This show, featuring openers Midland and Darrell Scott, is being called the concert of the summer and a history making event.

Stephanie Hudacek, manager for Darrell Scott, is a veteran musician who has worked behind the scenes writing for such musical acts as Brad Paisley and the Dixie Chicks. Hudacek spoke about Scott’s talent by alluding to an interview in which Zac Brown referred to Scott as Yoda and called him one of his favorite musicians in the world. 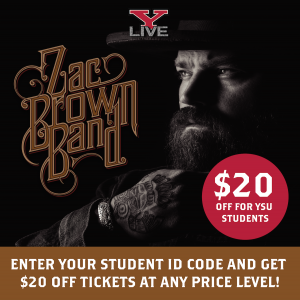 Hudacek said even though Scott is the opener, the audience shouldn’t be surprised to see him on stage past his set playing with the guys in the Zac Brown Band. One of the ripple effects of a concert with this magnitude may be the impact it will have on the entire Youngstown community.

Director of Student Activities, Erin Driscoll, believes the concert has the ability to connect the Youngstown community and show that Youngstown State University can be the glue that mends everyone together.

“Y Live presents a unique opportunity to bring a cross section of the community together, sharing an experience with a high profile artist right in the heart of campus,” Driscoll said. “It will strengthen the collaborative energy of our community and the role that YSU plays in it.”

Driscoll and the Student Activities staff have worked closely with the JAC Management Group to offer discount tickets to YSU students.

The president of JAC Management, Eric Ryan, said the idea of this concert had been in the works for a few years but it became a reality in June when the Zac Brown Band approved the show.

“It’s always difficult for an artist to play a first time event, especially when you’re on the level that the Zac Brown Band is,” Ryan said. “But we have a great relationship with the band’s team and we’re honored that they believed in Youngstown.”

Ryan feels the mere presence of the Zac Brown Band can benefit the YSU campus.

“Telling prospective students that we had Zac Brown Band on campus is a win-win for all,” Ryan said. If the concert is a success, both Driscoll and Ryan agree that Y Live will not be a one-hit wonder.

“If the event goes according to plan, this will become an annual tradition in our community,” Driscoll said. “Successfully hosting the event will provide momentum to attract other artists to Y Live in the future.”

Ryan and JAC management are planning to make this an annual event, but Ryan’s goal has nothing to do with topping the previous event.

“In our industry, it’s not about topping one event over the other, because that is a slippery slope,” Ryan said. “Y Live is about a celebration of our university, community and our valley’s renaissance, so hopefully it’s a huge celebration every time and each event takes on a life of its own.”