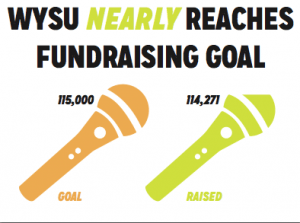 David Luscher, the associate director of broadcasting, said he is grateful for the donations the station received.

“If we didn’t have the financial support of our listeners, then we couldn’t continue to do what we do,” he said.

“Stations like ours all across the country hold these fund drives. Our listenership donate. We’re able to pay our fees, and then in turn networks are able to use that money to continue to create programing, so the listener is actually part of the process,” Luscher said.

WYSU’s fund drives are four-day events during which listeners can call in or go
online to make donations to the station. They are typically
successful and raise funds comparable to the latest drive.

During the event, volunteers help out at the station, performing various tasks such as taking phone calls from donors.

The money raised from the fund drives account for
approximately 23 percent of the station’s overall budget.

Laurie Wittkugle, an
administrative assistant for the station, is responsible for
organizing much of the event.

“Even though the fund drive is a four-day event, it lasts six months for me. … It
is very labor intensive from my standpoint,” Wittkugle said.

During the drive, donors may become members of the station for a $40 donation, or — for students and senior citizens — a $25 donation. This confers a few benefits to them such as access to certain events, the “Need to Know Card,” which entitles the member to discounts at an array of local businesses, and a one-year subscription to several magazines.

Increased donations can add further benefits such as WYSU memorabilia or
getting a short message on
the air.

Gary Sexton, the station’s director of broadcasting, emphasized the importance of WYSU radio.

“We broadcast high-level national public radio programs that look into a number of subjects and provide us all with lifelong learning opportunities,” Sexton said.

Due to successful fund drives like this one, WYSU can continue to provide the community with valuable news and information.