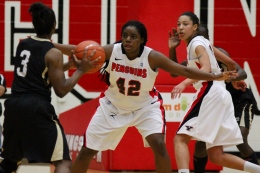 With the 75-59 win over Bryant University, the Penguins improve their record to 3-0. “Winning feels good,” said Brandi Brown, forward for Youngstown State University.

Although picking up a convincing victory, the Penguins got off to a slow start, failing to score until almost five minutes into the game when Monica Touvelle hit a 3-pointer to bring the crowd to life.

The game would remain close for the remainder of the first half.

Then, with 42 seconds left in the first, Amanda Barger hit a 3-point shot to give YSU a 27-25 advantage. However, Katie Whittington, a Bryant guard, hit a jumper with 4 seconds left, tying the game at 27 going into halftime.

The Penguins’ more than doubled their first half rebounding, grabbing 21 after halftime.

“I thought we played with a lot of energy in the second half,” Boldon said. “It was nice to see us respond.”

The Penguins forced 29 turnovers against Bryant — stealing 15 passes from the opposing team — which resulted in 34 points for YSU.

Boldon said his team is more physical and more passionate about playing defense.

Brown led her team in scoring with 26 points and rebounds with 19.

With 5:29 remaining in the game, the crowd of more than 800 exploded when Davis made a layup through a hard foul and converted her free throw.

Boldon spoke highly of the young freshman Davis, who had an impressive showing in only her third game at the collegiate level.

“Shar’Rae is a terrific learner,” Boldon said. “She’s got an incredible basketball mind.”

Although all three of YSU’s games have been during the daylight hours, Brown said that time doesn’t matter and doesn’t change anything.

“Whenever time we have a chance to play is always good and we always want to win, whenever — 12 o’clock, seven o’clock, 10 o’clock, nine o’clock, eight o’clock, we want to win,” Brown said.