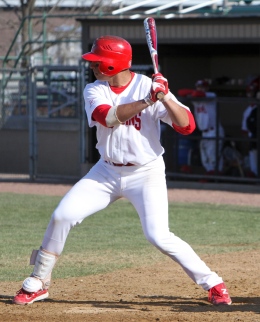 The roster consists of 12 freshmen, 10 sophomores, nine juniors and two seniors. Head baseball coach Rich Pasquale said in a press conference on Monday that he is expecting mistakes.

The Penguins head into the new season with hopes of picking up where they left off last season. They finished 14-41 overall, but ended with two wins in the Horizon League tournament.

Although there are 12 freshmen, Pasquale likes the added depth.

“The depth in our pitching is definitely a plus for us this year,” Pasquale said.

Sophomore infielder Drew Dosch said in the conference that he’s also excited about the expanded roster.

“The depth this year is really going to help, especially in the pitching staff,” Dosch said. “Everyone can contribute; everyone’s ready to play.”

Dosch added that the strength of the team does not fall in one particular area.

“Everybody came back this fall with a new attitude, kind of a new dedication, and I think the strength of the team is the great diversity that we have throughout the team,” Dosch said.

A plethora of pitchers

With the departure of former pitcher Phil Klein to the Texas Rangers, the Penguins look for a new ace, and they have 16 possibilities.

When the season begins on Friday in North Carolina, the opening day starter will be sophomore Patrick O’Brien, who pitched at Bowling Green State University last season.

O’Brien collected four wins and six saves in his freshman year. He sat out last year due to NCAA transfer rules.

Next in the starting rotation is junior Pat Shedlock, who spent the last two years at Cleveland State University and Cuyahoga Community College.

Either sophomore Craig Goubeaux or junior Jake Kucek will start at catcher on Friday. Pasquale doesn’t know yet.

“We’re excited about the two guys that we have back there,” Pasquale said.

Goubeaux batted .223 last year, with 29 hits and 13 RBIs. Kucek is a transfer from Cuyahoga. He had the third-best batting average in the country last year (.481) and was a second-team All-America selection.

Seniors in the infield

First baseman Jeremy Banks and infielder David Leon, the lone seniors on the team, will lead the infield. Pasquale said he is confident.

“I work with the infielders, and we have certain plans each day,” Pasquale said. “We want to continue to be No. 1 in field percentage like we were last year.”

Banks was the only .300 hitter on the team last year, tallying three homeruns, eight doubles and 26 RBIs.

Leon was last season’s leadoff hitter, but will bat fourth this year. He will also start on Friday as the designated hitter.

Pasquale said Leon could take over at any position when he is fully recovered. For now, sophomore Phil Lipari will start at shortstop, and freshman Jack Graham will start at second base.

Dosch was named to the Horizon League All-Newcomer team last year. He will start at third base and bat leadoff on Friday. He batted .262 last year, with 38 hits and 11 RBIs.

He said he’s better prepared in his second year.

“As the years go on, you have a better grasp of what people are going to try to do to you,” Dosch said, describing the transition from freshman to sophomore.

Openings in the outfield

Pasquale said he would try his best to replace former seniors Joe Iacobucci and Armani Johnson in the outfield.

Pasquale said he has high hopes for sophomore Marcus Heath, who is slated to start in right field. He was the conference player of the year and a second-team All-America pick last year at Sinclair Community College with a .430 batting average.

Another player Pasquale is proud of is freshman center fielder Kevin Hix.

“He just has a good smell for the ball,” Pasquale said of Hix. “He’ll make some mistakes here and there, but he wants to win, wants to learn, and he’s getting better.”

“It’s tough to replace a Joe Iacabucci from what he’s done in the four years that I’ve been here,” Pasquale said.