As winter is in its prime, Youngstown State University students and faculty must trudge through the snow-covered sidewalks and roads on campus.

Students and faculty received a YSU Penguin Alert on Friday, Jan. 12, which notified them that classes were cancelled after 3 p.m. due to forecasted worsening weather. Saturday classes were also cancelled, and while the university remained open, services on campus were limited.

Classes resumed on Jan. 16, but students and faculty said the roads and sidewalks on YSU’s campus were difficult to drive and walk through.

Students and faculty shared their concerns and complaints about the conditions last week.

Elena Merhaut, a sophomore psychology major, said she barely made it into the M-60 parking deck on Jan. 16, which frustrated her.

“I was really close to getting stuck there and there were cars behind me waiting to get in, also. To top it off, as I was driving through the deck, my car continued to get stuck by all of the slush in the deck,” Merhaut said. 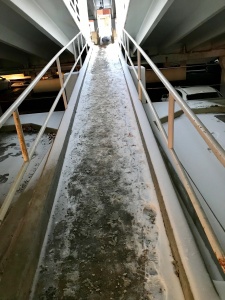 Brian Wells, an academic advisor at YSU, said over the past several years the road conditions in Youngstown and around campus have been concerning.

He said he walked down a ramp in M-60 that had not been shoveled and he almost fell multiple times. He is concerned about students and other faculty travelling across campus.

“High traffic areas deserve to be done,” he said.

Chuck Shasho, the deputy director of public works, said each storm is different and the storm last week was unusual because sleet was immediately covered with snow. It was the first large storm in Youngstown in three years.

“I don’t think there is anything wrong with their effort; we’re working with the resources we have. The guys were working 12 hours a day and the trucks were running 24 hours a day,” he said.

“I don’t feel that there was anything wrong with our effort at all,” he said.

David Ewing, associate director of the grounds department, said that the department does a great job with snow, but ice is different because it must be salted and then plowed down.

He said the university groundskeepers worked many hours and days after the storm, and slow clean-up was not from lack of effort but because of the conditions.

YSU Police Chief Shawn Varso said with conditions like they were last week, the grounds department at YSU and the street department does their best.

“Everyone has to remember the city of Youngstown is a significantly large area and [the street department] has a lot of surface area that they have to take care of,” he said.

Varso said students and faculty should try to get to campus early to avoid problems when bad road conditions are present.

According to U.S. Road’s “Road Management Journal,” when temperatures are above 20 degrees Fahrenheit salt and calcium chloride have the ability to melt ice in a reasonable amount of time, but at lower temperatures the ice takes much longer to melt.

The temperatures from Jan. 12, when the winter storm began, to Jan. 18 ranged from 26 to -6 degrees Fahrenheit.