The Sonder Bombs are a Cleveland-based indie/alternative, uke/punk and grunge/pop band new to Youngstown. The band was originally formed by frontwoman and ukes master, Willow Hawks and guitarist, Jimmy Wilkens, but now include bassist Jake Stephens and drummer Eric Heald.

To discuss more about The Sonder Bombs, and their frontwoman, a question and answer was conducted with Hawks.

Q: What bands inspired you to do this?

A: Our main influences in writing are Weezer, Say Anything, The Pixies and The Cure. It’s kind of like a weird mix of stuff.

Q: What were your favorite songs, artists or bands to listen to growing up?

A: Definitely Weezer. I love Weezer. I listened to a lot of Paramore growing up too.

A: The way we write songs usually is I will write the structure of the song, and I’ll write the lyrics and vocal melody on the ukulele. Jimmy will write a lead, we’ll practice and then we’ll bring it to the rest of the band to work on it together. It’s a total group effort. 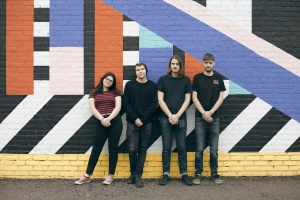 Q: What are your future aspirations for the band?

A: Right now, we don’t necessarily have a set, “we want this,” but we are going to be recording our album in early 2018, so that’s a big thing. One of our main things is to record the songs we have. As of right now, we’re trying just to play as many shows as possible, meet people, make friends and have fun.

Q: How is making music together moving you as a person and as a musician?

A: It’s really fun working with other people because for a long time, it was just me playing the ukulele by myself in the bedroom, and I didn’t let anyone hear. I only played covers, and I was scared to push myself to do something that was mine or original, and now I have the guys. We all inspire each other and provoke creation, so it’s really nice. I feel like a happier person being able to make music with my friends.

Q: What do you like about playing the ukulele?

A: I first picked it up when I was 16, and I liked it because it was tiny, adorable and easy to play. I started off by playing Misfits covers.

Q: Do you play any other instruments?

A: I can play “Seven Nation Army” on the drums. I play guitar as well, and then I’ve tried bass, but it’s really hard to play bass. I might give it another go at some point.

Q: What advice would you give to people who want to do what you are doing?

Q: Where did the name The Sonder Bombs come from?

A: Jimmy and I had just watched “The Runaways” with Joan Jett and Cherie Currie. We were watching that, and their single “Cherry Bomb” was stuck in our heads, and we were looking through a dictionary for weird words. One of us was on Urban Dictionary and we found the word “sonder,” which is the sudden realization that every passerby and everyone around you is living a life as vivid and as complex as your own. It grounds you when you’re feeling self-centered and it hits you like a bomb, so that’s our name.