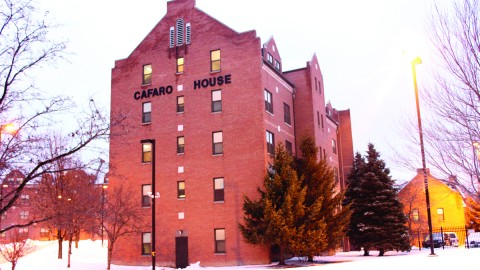 One of President Jim Tressel’s earliest endeavors after his installation centered on his belief that restructuring was necessary within the scholars program. The restructuring has been in development through the fall 2014 semester and will likely begin in earnest during the fall 2015 semester.

The purpose for the change, as Tressel stated, focused on desiring “more, better students” on campus, specifically as a part of the scholars program. This would require that the funds currently allocated to fuel the scholars program be spread out to accommodate a larger group of students. In doing so, there will be more honors students, but few with tuition, room and board covered.

Following the release of Tressel’s intentions to change the program, the Scholars held a planning meeting at Cafaro House, where options ranging from picketing the president’s house to letter campaigns were discussed. Ultimately, the Scholars decided to wait for the administration’s plans to solidify before responding.

Betty Jo Licata, dean of the Williamson College of Business Administration — who has been tasked with overseeing the changes coming to the scholars program — held an open forum event later in the fall semester during which she explained some of the proposed changes and heard feedback from a small group of current Scholars.

“We’ll be keeping the same criteria for the honors program, but there will be a limit of eight to nine full ride scholarships awarded within the program,” Licata said.

The reformed program will allow for more students to pick up partial- and full-tuition scholarships without room and board.

Michael Slavens, YSU Student Government Association President, represents student interests to the administration and is a member of the scholars program.

“It’s a numbers game. The way it is now, there is a large amount of money going to a relatively small number of students. In order to conform to the lofty but important goal of ‘more, better students’ people felt that the money could be used to attract more students if it wasn’t full rides,” Slavens said. “I don’t necessarily agree with this logic because it doesn’t factor in the intangible benefits of the program by just looking at the money.”

The restructuring of the scholars program has fallen in line with Tressel’s overall goal of raising the school’s income through focusing on attracting more non-regional students, of which currently only make up 14 percent of YSU’s student population.

“If we want to compete at the next level, we’ll need to have a concentrated effort to bring new students in [to the university],” Tressel said.

According to Licata, an expanded honors program will become a central program to the YSU marketing strategy.

“We want to make the honors program a centerpiece to the marketing of the YSU experience … we want to create dynamic events for honors students and specific places for honors students, though don’t want to foster elitism among the students. We want to foster community within the honors program and between the program and the rest of campus,” Licata said. “It’s all about building a bigger, more enhanced program.”