Youngstown CityScape raised money to fund the Wick Park improvement project with the help of the inaugural 5K Run/Walk, which was held April 14.

Youngstown CityScape, in partnership with the Youngstown Rotary Club and local businesses, held the run with all proceeds going to the Wick Park improvement project, which aims to improve the running track and the pavilion in the center in the park.

Phil Kidd, associate director of Youngstown CityScape, has been working on the Wick Park improvement project since 2008. Since then, he has raised $850,000 over 10 years and helped improve landscaping, exercise equipment stations, parking, sidewalks and a disc golf course.

Kidd said the event had over 100 people register for the inaugural race.

“I think this was an amazing turnout. We were hoping to get at least a hundred people, but we flew past it,” Kidd said.

Kidd explained how they were able to get the bulk of the money they needed for the Wick Park improvement project.

“We were able to get $350,000 from the Youngstown Rotary Club so that helps with the renovation of the pavilion that should be finished by the end of summer,” Kidd said.

The Youngstown Rotary Club was able to raise the money for the pavilion as part of the club’s Centennial Campaign. A donation of $100,000 came from the city of Youngstown that will be given over a period of time. 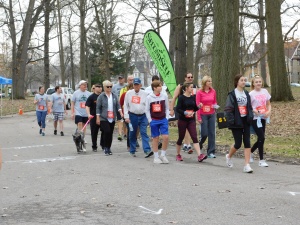 Kidd said that this project was important because it has helped establish the park as one of the city’s most used assets.

Ethan Courtney and Emma Crissman, seniors at Ursuline High School, took part in the event, using their education as motivation to help.

“I’m a cross country runner for Ursuline so I use the park to practice all the time, so I figured I’d help out,” Courtney said.

Courtney placed with the second fastest time overall in the race.

“I plan on going to Youngstown State University, so I thought I should help make the city look its best,” Crissman said.

Steven Protheroe, owner of the Culturehouse Coffee Roasters in Youngstown, offered free baked goods and coffee to runners and staff to help energize people for the early morning run.

“We’re about to open a brick0and mortar across-the street called Cultivate and we wanted to make an investment in the park’s success,” Protheroe said.

Protheroe said that it was encouraging seeing so many people coming together to help the park.