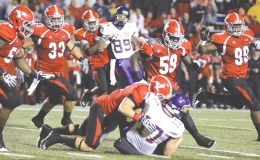 A swarm of Penguins defenders surround the University of Northern Iowa’s Sawyer Kollmorgen (17) in YSU’s 42-35 victory on Sept. 22. Photo by Dustin Livesay/The Jambar.

Back in August, before Youngstown State University began its 2012 football season, Penguins defensive captain Aronde Stanton made a bold statement about his unit.

Commenting on the critics doubting the YSU defense, Stanton said, “We’ll use that [criticism] as motivation to show people that we can be a championship defense. And we will be this year.”

Although the Penguins hold a 4-1 record, it’s obvious that the defense is playing nowhere near a championship caliber. Just check the statistics.

Out of the 10 Missouri Valley Football Conference teams, YSU ranks sixth in total defense — allowing 343 yards per game — and seventh in points allowed — allowing 24.8 points per game. The Penguins are also last in pass defense, opponent third-down conversions and interceptions.

Furthermore, after allowing only 17 points through the first two games, YSU has given up point totals of 24, 35 and 48.

“Frankly, they didn’t run anything we didn’t expect them to run,” head football coach Eric Wolford said about NDSU in Tuesday’s press conference.

With realizations like this, it is easy to see why Tresey is so stressed over his defense. However, Wolford has confidence that the unit will improve.

“I feel much better about where we are at corner … and I feel good about [our linebackers],” he said. “And I think our defensive line needs to be motivated a bit. But I have all the confidence that [defensive line coach] Tom Sims has their attention right now.”

Also at the forefront of YSU’s attention is No. 14-ranked Illinois State University (4-1). The No. 8-ranked Penguins will play the Redbirds at 2:04 p.m. on Saturday.

Senior offensive tackle Andrew Radakovich said the team is refocused as it heads into its third straight game against a ranked opponent.

“We got a little cocky, and [NDSU] caught us slipping,” he said. “I don’t think that will happen to us again because of the lesson we learned.”

Like the Penguins, the Redbirds will try to bounce back following their first loss of the season to Southern Illinois University.

“Much like us, I expect them to rebound and get a great effort from their football team,” Wolford said.

Led by quarterback Matt Brown and running back Darrelynn Dunn, ISU is averaging 33 points per game and 422 yards per game. On the opposite side of the ball, the Redbirds rank second in the MVFC in total defense.

“They do a little stand up with the ends and move some guys around.”

While YSU knows that the Redbirds’ defense poses a tough test, Shaw said the Penguins first have to regain their identity.

And what is it that the YSU offense does best?

“It’s representative of where we’re from,” Radakovich said. “Youngstown’s not a fancy place, but we’re hardworking. We’re going to hit you in the mouth and keep hitting you until you quit, and we can’t let teams get us out of that.”