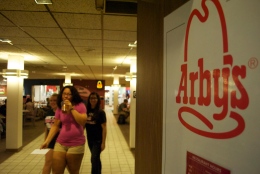 The contract between Youngstown State University and Arby’s ends Nov. 30. After 30 years in Kilcawley Center, Arby’s may be replaced, should YSU not renew the restaurant’s contract.

In February, YSU officials released a request for proposals to various restaurants and franchises for the 8,500-square-foot space.

“We are seeking a contractor to provide fast food dining options that will appeal to our students, faculty, staff and many visitors,” said Matthew Novotny, executive director of student services.

The proposal asked for creative and innovative ideas for the space on the first floor of Kilcawley Center to complement the existing features and catering services.

The university is looking to increase traffic and increase student, staff and visitor satisfaction.

Proposals for the space are due by 2 p.m. Thursday. Contractor presentations are scheduled for April 30.

If the contract with Arby’s is not renewed, the proposed build date for the newly selected restaurant is scheduled for the end of fall semester after design plans have been approved. Any new business should be open and ready for customers in January.

The new restaurant will have a contract for seven years and six months, or from Dec. 1 to May 31, 2020. The contract also specifies health regulations, insurance liabilities and responsibilities, and Kilcawley Center rules and regulations.

The university will also benefit from commissions — a portion of each eatery’s sales that goes toward the Kilcawley Center operating budget to supplement rent and utilities.

The contract for the new restaurant mentions upholding the scholarship program that Arby’s has awarded throughout the years.

Along with the scholarship, students are hoping for something new.

“I hope we get a new restaurant in Kilcawley,” sophomore Sarah Bowman said. “I live in Buechner, and sometimes I need a change from the dorm’s food, but everything on campus is usually expensive. I hope whatever they choose, it’s a little cheaper.”

Junior Stephanie Furman said she just wants something everyone will like.

“I know a lot of people don’t eat at Arby’s because it’s mostly fried food,” Furman said. “Hopefully, if they pick a new place, it will have more options.”