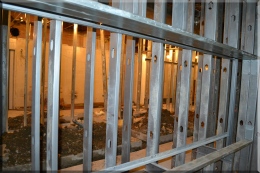 The date that Wendy’s was expected to open in Kilcawley Center came and went on Monday as construction continues. Photo by Kacy Standohar/The Jambar.

Students hungry for Wendy’s while on campus will have to wait another month.

The date for the eatery’s grand opening in Kilcawley Center has been pushed back to Nov. 5, though the tentative opening date AVI Foodsystems gave Youngstown State University in the summer was what would’ve been Monday.

John Young, director of Kilcawley Center, said though the new date cannot be guaranteed at this point, he is confident it will be met.

“Nobody knows that there won’t be any snags, but the Nov. 5 date is realistic,” Young said. “The equipment has been ordered, and AVI is committed to opening it on time.”

Danielle Bair, a director of dining services at AVI, said they are working intensely with YSU to get the Wendy’s space open as quickly as possible.

Cory Thomas, an engineering student living in Cafaro House, said he was disappointed that Wendy’s did not open yesterday.

“It’s a big difference from what we were told originally,” Thomas said. “I was ready to eat some Wendy’s, and there’s no Wendy’s yet.”

Though Thomas said he understands the reason for the delay, he is ready for a new dining option.

“It’s getting old, eating everything here a couple times a week. It’ll be nice to have something new to eat,” Thomas said.

Arby’s, which operated at the location for decades, closed June 8. AVI took control of the space on July 2.

“The location missing a restaurant for that long is hurting dining services financially, so they’re anxious to get the doors open again,” Young said. The building process has taken longer than originally expected.

“It’s been completely overhauled and gutted down to its shell,” Young said, referring to the space formerly occupied by Arby’s. “Wendy’s has chose to build from scratch.”

Young said this includes new finish on the walls and floors, ventilation, plumbing, sinks and more.

“AVI has worked with the Wendy’s corporation to expedite the process, but some things were not negotiable, such as the extensive training [employees and managers must go through],” Young said.

Bair agreed that part of the delay stems from the long training process.

“All managers must go through eight weeks of learning ‘the Wendy’s way,’” Bair said. “This includes everything from proper cooking techniques to customer service levels to sanitation measures.”

This is AVI’s first Wendy’s franchise. It is also an “untraditional location” because it is on a college campus, is not a stand-alone building and does not have a drive thru. Because of this, Bair said, there are a lot of details that must be negotiated before the grand opening.

Wendy’s is updating the look of its restaurants nationwide, and YSU students will get to see this look introduced once the building process is complete.

“There are some more modern elements to the finishes and artwork in the restaurants, as well as a new marketing effort that stresses freshness and quality of food,” Young said.

Another new feature Wendy’s is introducing is a breakfast menu. When the store opens, the YSU location will be the only Wendy’s in northeast Ohio to offer breakfast.

“Upon opening, we will be offering biscuit sandwiches, breakfast burritos and the Redhead Roaster coffee program,” Bair said.