Several changes came to campus this semester, including the privatization of the campus bookstore. The previously Youngstown State University-operated bookstore in Kilcawley Center is now managed by Barnes and Noble College.

Neal McNally, the vice president for the Office of Finance and Business Operations, said outsourcing the YSU bookstore benefits the students and the university. 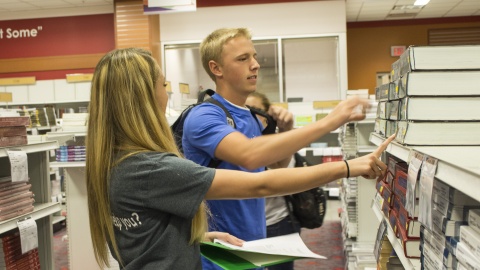 According to McNally, the revenue and resources saved through outsourcing allows YSU to sharpen services in other places that need funding on campus.

McNally said since the franchise is more adept to the bookselling business, the students will notice optimal customer service when purchasing textbooks.

Kellie Pennington, a computer engineering student, said she noticed an improvement to customer service in the bookstore.

“It’s a lot better,” Pennington said. “I got through a lot faster, and there are a lot of people to help, so it made it easier.”

“It seems like it’s moving along a lot faster, and people are getting in and out a lot quicker than the old one,” Ford said.

Although she praised the improvement, Pennington said the system is still not perfect.

The Barnes and Noble bookstore sorts the textbooks by subject and course reference number, unlike the previous sorting by author’s last name. Jonathan Bennett, an industrial engineering student at YSU, said he preferred the old system.

“I think the old layout, doing it by author’s name, was a little easier to find your books,” Bennett said. “I really needed some help now, because I didn’t understand how it was organized when I first got in there.”

Jo Hallwood, an accounting student, said she approves of the change.

“I like the setup,” Hallwood said. “[I like] how you can just look at the signs and see the subject. That makes it a lot easier, and now I don’t have to constantly ask for help.”

In addition, the bookstore has a price-matching option for students who purchase textbooks. Bennett said he really benefitted from the option.

Students are permitted to take book bags with them into the bookstore, which was not allowed in the old setup. Kirstie Feorene, an electrical engineering student, said she likes this change from the old policy.

“I would always try to take in my folder with my syllabus in it, and I would get yelled at,” Feorene said. “I like that it seems more easygoing.”

McNally said a stand-alone Barnes and Noble College bookstore is going to replace the location in Kilcawley Center in the near future. The bookstore will be built on Fifth Avenue, complete with a cafe much like the store in the Boardman Plaza.

“It will be a great venue for studying and socializing,” McNally said.

Although subject to change, the stand-alone Barnes and Noble bookstore project is expected to begin in September and be completed by the 2017 fall semester.