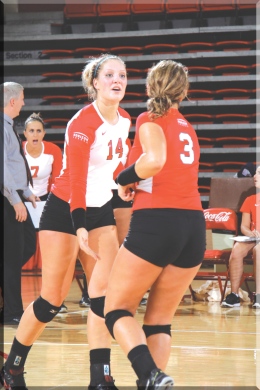 Missy Hundelt (14) and Erika West (3) celebrate during a home game at Beeghly Center this season. The Penguins finished with an overall record of 15-14. Photo by Dustin Livesay/The Jambar.

“I’m very fortunate for what I stepped into,” Hardaway said. “There are certain things you expect to find when you come to a losing program, and that wasn’t the case here.”

While a first-round exit in the Horizon League tournament isn’t exactly what the team was hoping for, Hardaway said he’s still pleased with the season and the progress made.

“Looking at the team statistically, we made great strides, but we haven’t come close to the potential that we have on this team,” Hardaway said. “There’s more in them.”

This year, the Penguins accumulated 15 wins — more than the wins from the previous three years combined.

Hardaway said it’ll be harder to improve and fine-tune the smaller things, but he said he believes that his team can do it.

“This team is a team that can compete for a title in the Horizon League; they’re athletic and physical enough,” Hardaway said. “I don’t think it’s far-fetched.”

With this season coming to a close, Hardaway said it is initially important for the women to rest and have their injuries fully heal.

“In the spring, we need to get physically stronger and give more attention to defense,” he said.

Junior Missy Hundelt, who was elected to the All-Horizon League Team, added that the season was a success.

“To get [to the Horizon League tournament] and get past the regular season was a great accomplishment,” Hundelt said.

Hundelt said she was also excited to make the All-Horizon League Team.

“It was also a goal my first two years, so it feels good to finally make it,” she said. “I didn’t get there by myself; I owe a lot to my teammates.”

As opposed to other teams in the league, the Penguins will lose only one senior, Kelsey Wagy, and they’ll have a large senior class of seven members next year.

Both Hardaway and Hundelt said they have high expectations for the upcoming season.

“The league will be very competitive next year, but our goal will be to win the conference tourney and get a bid to the NCAA tournament,” Hardaway said.

Hundelt has more in mind than just winning the tournament.

“We want to host it here; a lot of us are graduating next year,” she said.

Hundelt said she knows that YSU needs to have a strong offseason in order to host the tournament. She added that all members of the team are close, and that they have the same goals; this closeness, Hundelt said, contributes to the team’s success.

“We all have a great work ethic and feel the urgency to win games,” she said.

“There’s always room for improvement. There are some games that we could’ve and should’ve won. … We can definitely get better.”