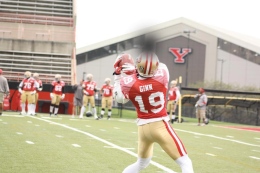 San Francisco 49ers wide receiver Ted Ginn Jr. practices on Sept. 28 at Stambaugh Stadium. The 49ers used the WATTS while they were practicing on campus. Photo by Dustin Livesay/The Jambar.

The Watson and Tressel Training Site has been giving Youngstown State University’s teams a new place to improve their games since it opened.

“Having that on campus is no less than awesome,” said head baseball coach Rich Pasquale. “It is so nice to not have to travel during the offseason and be able to walk to our workouts.”

Trevor Parks, YSU’s director of sports information, said that almost every team has, at some point, worked out at the WATTS.

“Everyone who comes to visit … has been impressed,” Parks said. “We have had a couple people from the Horizon League over there, and they were impressed. The Horizon League Network is doing a feature story on the facility.”

“I think we have used it more than any other teams since [it] opened,” he said. “We can have guys go down there to get work in the cages or get in some individual workouts. Sometimes we would get washed out, but we didn’t miss a beat this winter.”

Intramural sports have also benefited from the facility, especially when the San Francisco 49ers practiced at YSU from Sept. 26 to Oct. 1.

“The one night we were over there was when the 49ers were in town,” said Joe Conroy, coordinator of intramural sports. “It was a great opportunity for us to showcase our facility. It was a great thing for our students.”

Conroy said that although intramural teams haven’t been able to access the WATTS more often, its existence has provided them with more opportunities elsewhere on campus.

“They have opened up space in Stambaugh [Stadium] by moving all the varsity teams to the WATTS,” Conroy said. “Before, when all teams would be using Stambaugh for their indoor events, they are now using [the WATTS], which I think is great to be able to sell your athletic program so that you can recruit that quality student-athlete.”

Conroy added that he hopes to one day be able to use the WATTS for more sports.

“As they get their system down,  I am sure there will be opportunities for us to run in there,” he said. “I think the way they are running it now is the right way.”

The public has been able to test out the track during its open sessions.

Parks said those have been well received.

Pasquale said being able to bring recruits there is a great sell for the athletics program.

“It’s just great for us and our guys,” he said. “We signed four guys, and one was from Mississippi, and when he was down here he couldn’t say enough about it. I really feel we have the best facilities in the conference with the WATTS and Eastwood Field.”

The WATTS is booked on Fridays and Saturdays for the next six weeks or so.