Every coffee lover knows the horror of taking a sip of hour old, lukewarm coffee.

Following the inevitable facial contortions and colorful language, most drinkers would toss out the offensive brew, but local coffeemaker Bob McGovern wants to challenge the way people engage with coffee at cooler temperatures.

McGovern’s Cartography Coffee specializes in locally brewed and distributed cold brew concentrates. Cold brew — not to be confused with iced coffee — is coffee both brewed and served cold. McGovern stumbled onto the unorthodox brewing method while trying to find a better way to make his daily cup of joe.

“I was looking for a way to make coffee automatically but also good. I love home automation … I can turn my lights on with my phone and my watch and then I ended up stumbling onto this — manual coffee — I went down that rabbit hole, and then I started experimenting with cold brew and I really liked it,” McGovern said.

Caffeine is most soluble in hot water, meaning less of the chemical is extracted from the grounds during the brewing process. This results in an overall lower caffeine amount in cold brews, though it should be noted that most cold brews are concentrated and used in higher coffee-to-water ratios than is used when making hot coffee.

Or, to put it simply, cold brewing gives you the option to make a less potent coffee without having to go full decaf. 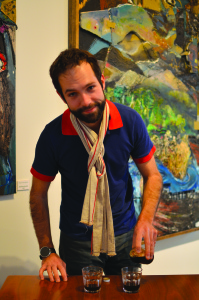 McGovern’s brew — while spending the majority of its time brewing in room temperature water — does take on a little heat at the beginning of its transformative process.

“Coldbrew is kind of a misnomer. I do it at room temperature for the majority of the brew. I actually start mine out hot. I’ll boil water, pour an amount of boiling water over the grounds — I get those whole and grind them myself — so after the boiling water I let that sit for a minute or so and then add cold water to it,” McGovern said. “Once that’s done, I cover it, put it away and come back the next day. You can taste the difference between a batch that starts at room temperature and a batch where you begin hot. The temperature does make a difference.”

McGovern brews and distributes his batches as concentrates, and encourages experimentation with the coffee. Some of McGovern’s favorite recipes include mixing the coffee with other beverages, such as tonic or ginger beer, but include more exotic concoctions, like his cocktail “The Gallery.”

“I was here for the opening of the Soap Gallery and I did a cocktail for those who didn’t want an iced coffee. It was called The Gallery and was made from cold brew, ginger beer and Fernet-Branca — an Italian herbal bitter liqueur. Most of the people who tried it had never had Fernet-Branca but it was really well received and it’s something you can make with ingredients you can buy right around downtown,” McGovern said.

He hopes the versatility of the concentrate will lend itself to interesting consumer created concoctions. McGovern plans on sharing the recipes he receives from customers on Cartography’s facebook page.

“We’re working on new tags that will feature recipes and we’re hoping people on the facebook page will share the recipes they come up with as well. We want people to go to town and experiment with it and enjoy the coffee the way they like it,” he said.

After discovering his affinity for the process and consumption of cold brew, McGovern eventually decided to elevate his coffeemaking habit into a business.

“It’s something I can do on the side as something more than a hobby but less than a full time job,” he said.

McGovern works fulltime as a forecaster at First Energy in Akron, Ohio and runs his coffee company — Cartography Coffee — in his personal time. In order to create the first batches of his cold brew, McGovern looked to the Commonwealth Kitchen Incubator to help defray startup costs.

“Through being on the Tedx committee I’d worked with Tom and Katie Phibbs of The Lettuce People and got to learn a bit about the [Commonwealth Kitchen Incubator]. It’s been a good experience and just the fact that that space exists is great. I’ve explained the incubator to people in Akron where I work, and they’re surprised because there’s nothing like it in Akron, and it’s neat when Youngstown has something before another one of our surrounding cities,” McGovern said.

Though McGovern cannot grow the beans locally, he does purchase them from a local vendor — Friends’ Specialty Coffee — that provides single-origin beans.

“The name originally came from me thinking it sounded cool but then I kinda realized it was actually appropriate because cartography is obviously tied to maps, and I’m trying to do something as local as possible as you can get for coffee,” McGovern said. “You can’t grow the beans here but you can roast it, brew it and bottle it here, so once the coffee gets to town, it’s as local as it can be.”

After a year of development, McGovern spent a month in the incubator and released his first batch of Cartography Coffee at the Youngstown Neighborhood Development Corporation’s Mahoning Avenue Better Block event.

This began his campaign to integrate Cartography Coffee into as many Youngstown businesses as possible.

One Hot Cookie uses the brew in their coffee icing and Suzie’s Dogs and Drafts makes milkshakes with the concentrate. 8 oz bottles are sold at the Soap Gallery and Grow Youngstown is offering Cartography Coffee as an add-on to their winter shares.

Cold coffee in winter may seem counter-intuitive, but McGovern wants to assure everyone the versatile concentrate has one last trick up its sleeve.

“And yeah, you can make hot coffee with this too. Imagine that!”