Students, faculty and staff are unhappy with the current state of Ward Beecher Hall at Youngstown State University. The building is old and outdated, and there have been some problems with things like temperature control that disrupts class.

Michael Butcher, a biology professor who teaches various classes in Ward Beecher, said he has encountered a slew of problems while working in the building. He said there have been some electrical glitches, and it’s happened to him only a few weeks ago. 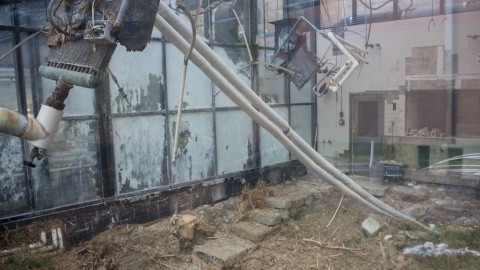 “There are motion sensors in one of the classrooms that I teach in, and there was some type of electrical short,” he said. “The lights flickered, the projector flickered on and off, and it actually shut down my Mac. It powered down from this glitch.”

Electrical problems aren’t the only things going wrong in Ward Beecher, Butcher said. He said the building has some areas where there has been water damage, including next door to his laboratory.

“Pipes have busted and leaked through ceiling tiles. We’ve had water lines that have burst, sinks that have cracked, sinks that don’t drain,” he said.

Thomas Diggins, another biology professor who teaches in Ward Beecher, frequently experiences water leaking through the ceiling and damaging his property.

“The infrastructure of the building is aging, so pipes are breaking,” Diggins said. “In my office last year, soaking wet globs of ceiling tile came right down on my desk and my computer … It is common throughout the building to see computers and pieces of equipment covered with tarp.”

The chemistry department had a $100,000 electron scanner hit with water from the leaking pipes, Diggins said.

Along with water and electrical problems, the building also suffers with climate control. Butcher said the lack of temperature control is affecting his students. He said when the weather was hot, the building was freezing, and they had to bundle up to stay warm.

“I remember wearing jackets when it was 75 to 80 degrees outside,” he said. “Now we have the heat on, and it’s the opposite extreme. It gets so warm that it can almost be unbearable.”

Butcher said the drastic changes in temperature aren’t good for the scientific experiments he and his students conduct, because a controlled environment is needed. Diggins said the climate control has cost them valuable plant specimen.

“The greenhouse no longer has any functional climate control,” Diggins said. “Two winters ago, several plant specimens died in the greenhouse one night when it got cold outside.”

One of the more unusual problems with Ward Beecher is a vile stench.

“On the third floor of the newer part of the building there is an almost constant stench of some sort of sewer smell,” Diggins said. “Some of the bathrooms are in such lousy shape that the Health Department would close them.”

Despite these problems with the building, Diggins said no blame should fall on the maintenance crew. He said they are “on top of things.”

“The facilities folks are almost rising to heroic proportions,” he said. They’re here very quickly when things go wrong. They’re doing a good job of trying to stretch things as much as possible. They’re doing the best they can do.”

Diggins said the administration is somewhat at fault, because solutions haven’t been provided yet for the problems.

John Hyden, YSU’s director of facilities, said the administration is doing the best they can.

“The unfortunate thing is, that building will never operate as a state-of-the art lab facility, but that’s the building we have, and we do the best we can,” Hyden said. “There’s a host of problems in that building, and we work around those problems to keep it as functional as possible.”

Hyden said financing is a chief concern about renovating the building. He said there have been discussions of building a lab annex, but for now it’s off the table, because it’s too costly.