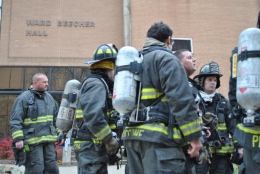 YSUPD officers said no one was hurt, but Tim Styranec, chemical storekeeper for the chemistry department, said some of the acid spilled on the student’s pants, and he was sent to the YSU health center as a precaution.

“This doesn’t usually happen but it was an accident and we were able to evacuate everyone safely,” Styranec said.

Styranec arrived shortly after the spill and then called YSUPD.

“I went to go clean it up and I couldn’t breathe,” Styranec said.

Hydrochloric acid can burn the skin and is also harmful to inhale.

“If someone spills a beaker, it would be a different story,” Allen said.

Styranec and Allen said that appropriate measures were taken in pulling the fire alarm and notifying the police.

YSU junior Matt Morrow was working in the computer lab on the third floor when the fire alarm went off.

“Alarms go off all the time so I thought it was a drill or a test at first. I didn’t know it was a real emergency until I came outside,” Morrow said.

Classes for the evening were cancelled and will resume at 6 a.m. on Wednesday.