Unless you’ve been living under a Snorlax for the past two months, you’ve probably heard of Pokémon GO. The game’s popularity has exploded in urban areas of the country, and Youngstown is certainly no exception.

Larger cities have more advantages to those who play the game, one of the biggest being the large quantity of PokéStops available to players. PokéStops give players experience points and allow players to stock their inventory full of Pokéballs and other items.

According to PokemonGo.com, PokéStops are located at interesting places, such as public art installations, historical markers and monuments. 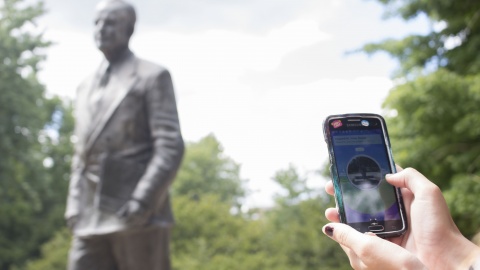 Those who live near Youngstown know the city has many museums and monuments. Youngstown State University’s campus is a popular location to catch Pokémon. Most of the campus’ PokéStops are within a short walk of each other such as Kilcawley Center and the Andrews Recreational Center. For more serious players, the largest chain of PokéStops is located on the east end of campus.

Starting at The McDonough Museum of Art, one can travel west through the center of campus and visit nine out of 15 PokéStops available on campus.  Anyone who follows this path will be able to collect many PokéBalls and miscellaneous items.

All three locations are within a couple of hundred feet of each other, so if a trainer drops a lure module on all three PokéStops, Pokémon will be rampant in the area.

Along with the hot spots on campus, there are also some places that should be avoided. The number one spot to avoid right now is Lincoln Avenue. With the construction currently going on, if trainers start hopping the orange fences to catch rare Pokémon, trouble could easily follow.

Lieutenant Bryan Remias of the YSU Police Department said there haven’t been any major incidents caused by Pokémon GO players in the area, but playing the game safely should always be a conscious thought of trainers.

“Be aware of your surroundings and I would suggest that the game be played during daylight hours,” Remias said.  “Lincoln Avenue is now under construction and a lot of the streetlights have been removed for this project. There could be areas where there are holes in the ground.  Also, if you must play during the night I would recommend that you be in a group as there is always safety in numbers.”

Playing in groups certainly increases one’s safety and luckily for trainers around campus, Pokémon GO has proved to be a game with numbers on its side.  For Aaron Stiner, president of YSU’s Video Entertainment Gaming Association, the vast numbers the game attracted was shocking.

“I went to Boardman Park to play it and was surprised by seeing 200 plus people playing it all at once,” Stiner said. “I made friends with so many strangers who were also playing the game. The thing that makes the game fun is that everyone is playing it and it’s making everyone more social.”

Pokémon GO has created an addictive nostalgia for players who were born in the ’90s, when Pokémon first exploded onto the worldwide scene. With new updates and training accessories set for release in September, this is one freemium game that seems like it’s here to stay.