A new tattoo shop opened on Lincoln Avenue under the name of DNA Studios. The shop was originally founded in Warren, but relocated to Youngstown in July 2017 due to its undesirable location.

This business has more than what meets the eye. In addition to being a laboratory for creating body art, founders and tattoo artists Amber Slick and Dennis Kirsch have created a way to link their artwork both on the skin and on canvas by transforming the tattoo shop into an art gallery as well. 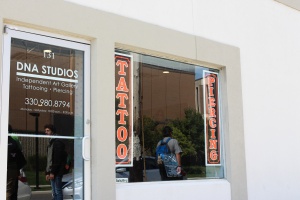 The shop is filled with sketches, photographs, paintings and sculptures from a majority of local artists in addition to a few international artists. The art ranges from abstract to psychedelic and a wide array of other styles, all in part due to Slick’s ability to select the artwork as the shop’s official curator and tattoo artist.

Roy Schmidt, manager of DNA Studios, was both a patron and friend of Slick and Kirsch before they asked him and his business partner, Ian Wilson, to take over the business aspect of the shop while they focused on tattooing.

Schmidt said that DNA Studios is not what you would typically expect when you think of a tattoo shop. He said the calm atmosphere and brightness on the inside catches a lot of people off guard when they stop in to check out the new shop.

When the shop closes at 8 p.m. and the tattoo guns are cleaned and put to bed, the artistry doesn’t stop. Instead, it follows Slick and Kirsch, who married last year, back to their home where they continue their creativity by drawing and painting.

Sometimes, their artwork can be found not only on the skin of their customers, but also providing a pop of color along the white walls of the shop.

Troy Elsea, a student at Youngstown State University, first met the couple when they were his neighbors and since then has had all of his tattoos done by Kirsch. 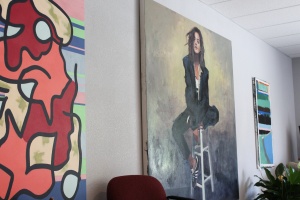 He had three tattoos done thus far, one piece on both of his arms and a biomechanical chest piece in honor of multiple sclerosis, which he recently had done in early September.

Elsea said that it is more convenient now that the shop is located so close to the university. He went on to explain his favorite part of DNA Studios.

“I actually like Dennis and Amber the most. They tell people what they think would look best on them, and they aren’t just in it for the money,” Elsea said. “I love their work and I feel the artists are what makes the shop good.”

Tiffany Menci, another student at YSU and tattoo enthusiast, has four tattoos, but only recently found out about the new tattoo shop.

“I think having the tattoo shop so close to campus makes it convenient for students and more personal instead of going to a shop farther away,” Menci said.

She said getting a tattoo is almost like surgery, believing that the most important aspects of a tattoo shop are cleanliness and reliable and personable artists.

Schmidt said although they don’t have a date set aside yet, he hopes to hold an official grand opening, as well as back-to-back opening and closing shows for the gallery.

Photos of Slick and Kirsch’s work can be found on their Instagram accounts @amber.gris and @denniskirsch13.