Youngstown State University students came out to see a runway with history with a Vintage Fashion Show on Oct. 18. Models were recruited from both on-campus and the local area to showcase clothing from past decades.

This fashion show was a first for Students in Fashion and Interiors (SIFI), serving as a joint fundraising effort. The organization’s faculty advisor and associate professor of fashion and interior merchandising, Taci Turel, said her students cooperated with other departments on campus.

“We had collaborations with graphic design before, when we had a design competition for a recycling initiative by YSU,” Turel said. “We have also collaborated with the theater program to create a new course in costume design.” 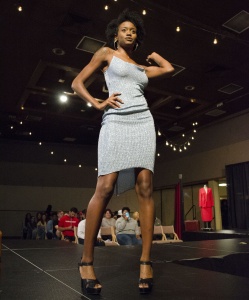 For the Vintage Fashion Show, both marketing and film students lent their support to SIFI. Jeneesta Ortiz, president of SIFI, said they put on their first event with limited preparation time.

“We decided to put the show into motion on Sept. 18,” Ortiz said. “We had one month, and actually getting it together, less than that.”

SIFI had the clothes, but they still needed people to model them. They advertised on social media and posted flyers around campus to recruit models. Each member was responsible for recruiting at least 10 models, and students contacted friends or fellow students to work the show.

Kelly Balasko was in charge of the models and their recruitment. Balasko said the models strut down the runway, basing their style off videos of other fashion shows.

“Communication was the main focus to get all the models informed on what was going on prior to the show,” Balasko said. “We contacted them with new information weekly as well as what they were going to be wearing from their choice.”

Nearly 30 models participated in the show, which Balasko said was amazing.

“Everyone who volunteered had a blast and loved being a part of the show,” Balasko said.

The modeled clothes were available for purchase in the back of the Chestnut Room. The event was free and open to the public, but donations were accepted. Balasko said this event encouraged the participants to try new and different things.

“It was such a good feeling to see that all the hard work and time we put in paid off,” Balasko said. “We were so happy with the response we got, considering the short notice.”

Turel said the event was a success and was impressed with what the students accomplished in less than three weeks. In the future, she hopes they’ll be even more prepared to host their next fashion show.

“I would definitely be interested in doing this yearly,” Turel said. “This is an incredibly effective learning experience for my students.”