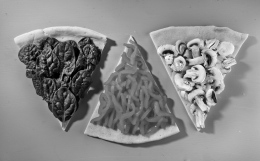 For instance, during KC Food Court renovations, vegan items on the menu were overlooked but were quickly added, Krol said.

Christman Dining Commons now has a “Green Cuisine” station featuring an array of options such as hummus, tofu and tempeh; the station is open for lunch and dinner.

At Jump Asian Express in the KC Food Court, Krol has added a vegan stir-fry option. At Pete’s Place and Pennyguins, a vegan meatball sandwich is now available, along with vegetarian soups and a vegan cheese and pepperoni pizza.

The university will also hold an annual vegan Thanksgiving feast. “We’re trying to make sure we use local and organic products as much as possible,” Krol said.

YSEARC President Michelle Gbur said Christman’s “Green Cuisine” station is not entirely vegan, but that it is a step in the right direction.

“Christman’s has not abolished any of the old food options that were available, but simply moved them to a different area in Christman’s, or offer them on different days and times,” Gbur said. “Students and faculty have been raving all good things about the changes made regarding healthier options on campus.”

Dining services recently added cue code labels to some vegan options, so students can scan the label from a smartphone; doing so will show ingredients and caloric intake.

Gbur said YSU Dining Services has improved labeling for students with allergies and for gluten free, vegan and under 500 calories requests.

“YSEARC is hoping all vegan items can be labeled, so vegans can know with confidence what is made without animal products, and students will actively look for the labels to choose what they want to eat,” Gbur said. “YSU is looking to add vegan desserts and sides that are normally made without animal products, so it benefits everyone — vegans and non-vegans. This is why the labels are important since desserts offered at YSU are typically non-vegan.”

These YSU herbivores have made progress after 2,402 student signatures and help from PETA2, a youth division of People for the Ethical Treatment of Animals.

“It’s great to see more and more students looking for humane and healthy vegan options in the dining hall,” said PETA spokeswoman Shakira Croce. “Going vegan is the best thing you can do to help animals, and Youngstown State is making it easier for students to choose meals that are better for the environment, the animals and their health.”

He said he dealt with a tremendously sympathetic group at YSU. He expects dining services to work with students to keep these vegan options around.

“YSU students are horrified to learn that cows have their throats slit while they’re still conscious, and that chickens are scalded to death in boiling hot water before being turned into McNuggets,” Huling said.

“It’s simply not the kind of industry that students want to support, and thanks to the many delicious vegan options available nowadays, they no longer have to.”

Huling was pleased volunteers took a moment to sign the petitions. He said it is important to remember that vegan options are popular among all students — not just those who are vegan.

“According to a study by food-service provider Bon Appetit, the number of college students who identify themselves as vegetarian has risen by 50 percent since 2005, and the number of vegan students has more than doubled during the same period,” Huling said.

Although she’s not a vegan, freshman Tori Francioni said she is not opposed to trying vegan options on campus.

“I’m really committed to not gaining the freshman 15,” Francioni said. “I would try these new meals.”

However, some students living in Cafaro House who frequent Christman said they feel like non-vegan options are diminishing.

“It’s OK for them to have options, but I feel like they are taking away what we have because [vegans] aren’t even close to the majority at all,” said sophomore Ashley Smith.

Sophomore Mary Smrek said she was disappointed that dining services removed the “Red Hot Chef” station at Christman and replaced it with the “Green Cuisine” station. “Red Hot Chef” offered tacos and fettuccini alfredo, among other menu items.

“They took away the one time we got specials. It’s just the little things,” said sophomore Emily Andriko. “I tried vegan food, and it’s not terrible, but I don’t appreciate it being there.”

1 comments Anonymous Thu Sep 27 2012 00:07 Maybe Mary feels like the cow and chicken now??? I understand her plight of wanting specials however we must share the universe and sometimes in life giving up our pleasure for a greater good is worth it in the end. Plus do the research eating an animal in that state sends many toxins through it’s system is toxin really mmm mmm good to you?