Youngstown State University’s Theater opens the season with “Vanya and Sonia and Masha and Spike,” a comedy by Christopher Durang, directed by Lisa Ann Goldsmith. 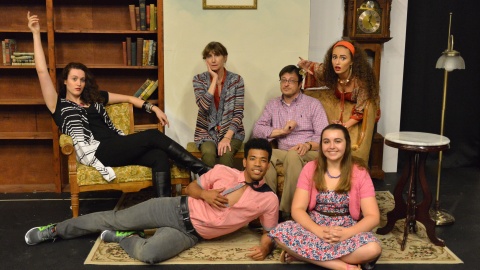 The play is about middle-aged siblings, Vanya and Sonia, sharing a home that their sister Masha owns. Masha comes home with her boyfriend, Spike, and threatens to sell the house. The play talks about their life, loves and the possibility of losing their home.

Goldsmith is putting a new twist on the original play by using actors of multiple ages.

“I am using two actors who are middle-aged, the rest of the cast is college students,” Goldsmith said. “The original play is made up of a middle-aged cast to fit the roles. I enjoy watching the younger actors keep up with the older actors.”

Quincy Carrier, YSU senior, is taking on the role of Spike. He got into theater in high school, and it has been a passion ever since.

“I was ineligible for baseball my junior year in high school and had nothing to do. My friend, Savon Gibson, was directing and writing his original play called ‘Bridge Point High,’ and he asked me to come to a rehearsal,” Carrier said. “At this rehearsal, the actor playing the role of Mike no showed, and Savon asked me to read for the part. I did, and he loved it, and then he asked me to play the role of Mike.”

Actors have a heavy rehearsal schedule, but the practice doesn’t stop there. The cast spends many personal hours rehearsing for their roles, and some do more than that.

Mia Colon, YSU sophomore, is playing the role of Cassandra, who is a cleaning lady and soothsayer. Colon said that the cast had to spend all of their free time practicing with only having a month to rehearse.

“We started rehearsal Aug. 30, and our opener is Sept. 30, so we had just about a month to rehearse,” Colon said. “You have rehearsal time, but then you have notes to go over, as well as lines outside of rehearsal. The more time you dedicate to the research and behind the scenes work, the better the performance.”

Some of the show’s elements derived from Anton Chekhov’s works, including character names and settings.

“The play is fun, smart and funny,” Goldsmith said. “Durang has taken the plays of Chekhov and made them more accessible and up to date.”

The play will open Sept. 30. The show will run Sept. 30 through Oct. 2 and Oct. 7 through Oct. 9 in Bliss Hall’s Spotlight Theater. Friday and Saturday performances begin at 7:30 p.m. and Sunday matinee performances are at 2 p.m.