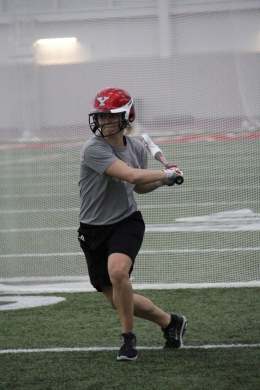 The obvious goal for most teams is a conference championship. The same could be said for the Youngstown State University softball team, but how it gets there is as of yet unknown.

Still, the team has faith.

“We’re a great team, and we’ve shown it last year,” said junior catcher Vicky Rumph. “We beat teams that nobody else thought we would beat. This year, we’re even stronger. Nobody has any idea how much stronger or dangerous we can be.”

The Penguins finished 22-24 last season — and ended on a six-game losing streak.

“[It’s] probably the most experienced team we’ve had in my four years,” Campbell said. “We have a good mixture of upperclassmen with some young talent.”

“We have a few young ladies who have started all three years here,” Campbell said. “With that being said, it does help the younger kids for the experience aspect.”

The Penguins begin the season on Friday in South Carolina. The women and coaches said preparing indoors at the Watson and Tressel Training Site this year is a step up from doing so at Stambaugh Stadium last year.

“Practicing in the WATTS is more like real life,” said sophomore pitcher Casey Crozier. “We have the turf. We have the bases. It’s so much better than the gym floor, so we’re really grateful for the WATTS.”

Poised for the upcoming season, Campbell doesn’t know who will start where. He said he’ll pencil in the lineup one hour before the first game begins.

“We’ve been able to add some arms in there to help,” Campbell said. “It gives us a chance to help finish out games.”

Crozier said the pitchers are going to be tough to hit against.

“We have two really solid freshmen that we’re probably going to depend on a lot, so we’re really excited and hopefully complement each

other pretty well,” she said.

innings pitched.  Crozier could become the first YSU pitcher since Kelly Murphy from the 2003-2004 season to post back-to-back 10-win seasons.

The roster consists of three catchers, but it will come down to two: Rumph and Palmore. Rumph, who was named to the Capital One/CoSIDA Academic All-District team last year, also played third base, but will focus on catching this season.

“There’s competition right now,” Rumph said. “You just got to be confident, and that’s what it comes down to. You got to know your skills.”

A toss up in the field

The entire infield is up for grabs, from first to third and the two positions in between.

Philen started 140 games her first three years at shortstop, but is slated to play second base this year. Freshman Samantha Troxell is expected to take over at shortstop.

“All around, I think we’re pretty strong,” Philen said. “Everybody works hard. We just communicate well, which is one of our big things.”

Philen batted .200 last year with 20 hits and eight RBIs. She is projected to be at second with freshman Brooke Meenachan.

With Rumph focusing at the catcher’s spot, sophomore Samantha Snodgrass, a capable pitcher, will be at third base.

First base is a battle between sophomore Sarah Ingalls and sophomore Courtney Ewing.

The outfield position is the most experienced, with two seniors and a junior leading the way.

Jordan Ingalls and Thomas have a chance to become the third and fourth players in YSU history to reach 200 career hits. Thomas needs 39 hits to reach the milestone, while Jordan Ingalls is 42 away.

Jordan Ingalls said the outfielders worked on their arm strength in the offseason because the offense is already there.

“Everybody’s confidence is much improved from years past,” she said. “One thing that helps our outfield is our overall athleticism.”

Campbell said Jordan Ingalls is a senior leader and captain that could be the ultimate leader.

Thomas finished with a .313 batting average, a team-leading 10 doubles and seven home runs, and a .533 slugging percentage.