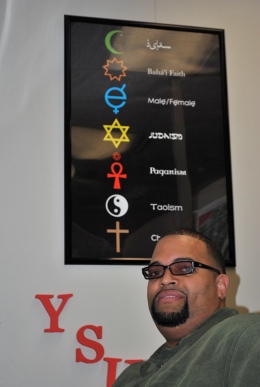 On his way to conduct afternoon Mass at St. John’s Episcopal Church, the Rev. Bradley Pace walks briskly across Youngstown State University’s campus, carrying a thick stack of books under his arm.

This month, Pace is reading four books: one written by a Muslim, one by a Jew and two by atheists. He said his reading material reflects a broad trend that is sweeping America.

David Campbell, associate professor of political science at the University of Notre Dame, has been studying this trend for the past five years using one of the most comprehensive religious surveys ever conducted.

He said 80 percent of Americans believe there are truths to be found in multiple religions.

“In recent years we have seen a significant amount of the population, religious or not, sway to more open-ended ideas regarding their faith,” Campbell said.

He found that around 95 percent of Americans of Protestant and Catholic faiths believe that someone who is not of their faith can go to heaven.

Within the same groups, around 80 percent believe that non-Christians can go to heaven.

Pace echoed Campbell’s sentiments and said that his congregation is a great reflection of the larger trend.

“The running joke is, whatever you believe, there is probably at least one Episcopalian who agrees with you,” Pace said. “There are just a wide variety of personal views within our congregation. I think the same is true of a lot of other Christian churches in the United States.”

Nathan Offerdahl, a YSU graduate student and parishioner at St. John’s, exemplifies the trend of religious inclusiveness by sitting in a pew on Sunday mornings and sitting at a desk in a religious studies class focused on reincarnation throughout the week.

“We live in a world that is starving for a good example of how to live with differences in a harmonious way,” Offerdahl said. “I think there is a genuine openness among many of the students who are active in their respective faith communities.”

“I had to argue persuasively for the collective perspective, which looks at every religion as an equally valid member at the table, but now students are already there,” Bache said.

While Bache agreed that students are more willing to examine other religious ideas, he stressed that this does not cause students to lose touch with their individual religious affiliations.

Cary Dabney, president of YSU’s Interfaith Youth Core, has been bringing together students of different faiths and said Bache’s insights stress an important message to students who feel they might be abandoning their faith by learning about another.

“We embrace the values that we share, but we do not dilute what makes us different,” Dabney said. “I believe it’s the exclusive aspect of belief that is subsiding.”

The recognition of the similar changes taking place in the classroom is a common theme among professors in the religious studies program.

Victor Wan-Tatah, a professor of philosophy and religious studies at YSU, said he has also noticed a drastic movement toward a new understanding of religion with his students.

Wan-Tatah said that since young people are experiencing life in a different way, it makes sense that religion would follow.

“The shifting is immense, and those who are not prepared to shift and open up to accommodate new ideas will have a lot to lose,” Wan-Tatah said.

Dabney said some get a skewed point of view because of the media.

“The media thrives on conflict and controversy,” Dabney said. “That is the story they are telling, and there are extremist views out there that set that story up perfectly.”

The conflicting viewpoints Dabney referred to are the extreme religious right and the scientific secular left, which are at opposite ends of the ideological spectrum.

Bache cited the ability of the media to reduce complicated issues into conflicting sound bites as one reason why the views of these two sides are most commonly heard from.

“We hear this one version so much, especially in the media, because of the obvious polarity that exists between extremes,” Bache said.

Pace said he feels the media gives a voice to individuals who play up divisions that are not as prevalent as they might seem, and that can have negative effects.

“There are students in my classes who are openly gay, and you can just tell they are showing so much anger towards Christianity,” Bache said.

Pace said it is sad.

“My church would be so welcoming to you,” he said.