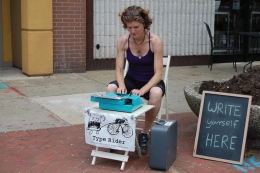 Maya Stein, aka the “Type Rider,” types the day’s writing prompt (“I wonder if”) on her turquoise Remington Ten Forty typewriter on the sidewalk near the Lemon Grove Cafe on Saturday. Arriving on bicycle, Stein stopped in downtown Youngstown for a few hours on her cross-country writing project. Photo by Emmalee C. Torisk/The Jambar.

Before Saturday afternoon, Cherise Benton had never used a typewriter.

Benton, a senior general studies major at Youngstown State University, works at the Lemon Grove Cafe in downtown Youngstown. Maya Stein, also known as the “Type Rider,” stopped there around 12:30 p.m. Saturday, carting a turquoise Remington Ten Forty typewriter, a folding chair and a folding table in the trailer attached to her bicycle.

Youngstown was Stein’s 22nd stop on a cross-country bicycle trip that began in Amherst, Mass., on May 5, the day she turned 40. Her final destination, which she intends to reach on June 13, is Milwaukee, the birthplace of the typewriter. When Stein reaches Milwaukee, she’ll have been on the road for 40 days and covered more than 1,300 miles.

But, at the stops in between, Stein is setting up the manual typewriter, chair and table — along with a chalkboard sign that reads, “Write Yourself Here” — and inviting anyone interested to contribute reflections and observations to a continuously evolving piece of collective writing.

As the Lemon Grove’s special events coordinator (and an admitted admirer of collaborative poetry), Benton covered the event for the cafe’s social media. In between snapping pictures and talking to participants, Benton sat down in front of the typewriter and began to write — albeit with a few difficulties.

“I have no idea how to use a typewriter, [and] I ended up typing over the same line. I’m not as good of a typist as I thought,” she said, contrasting the experience with the ease of typing on a computer. “It made me feel like Joan on ‘Mad Men.’”

For each stop on her trip, Stein, who both facilitates writing workshops and does her own writing, selects a new writing prompt. Each prompt, or jumpstart, is meant to be open to interpretation, and it can be completed in either a few words or several paragraphs, depending on how much time a participant wants to spend at the typewriter. Saturday’s prompt was “I wonder if.”

Benton wrote, “I wonder if I will break this typewriter.”

Stein rode into Youngstown that morning from Cooper’s Lake Campground in Slippery Rock, Pa., approximately 30 miles — or three hours — away. She said her scheduled stop at the Lemon Grove was a bit more deliberate than others. Typically, it’s much more spontaneous; Stein shows up when she shows up, then scouts out a location and sets up her typewriter.

Jacob Harver, owner of the Lemon Grove, said he was immediately interested when a friend of Stein’s contacted him about hosting the event.

“It’s beautifully romantic to have someone typing on an old typewriter,” he said. “Our interaction with the technology and the tools we use produces and directs our creativity.”

Kim Eisenstein and Stephie Goldfish, twin sisters who met Stein at a writing retreat in North Carolina, drove from Nashville, Tenn., to Youngstown for the event. Both had heard about it through the Internet.

“What Maya’s doing [is] bringing people together through the typewriter, which is supposed to be an obsolete machine,” Eisenstein said.

After eyeing the turquoise typewriter in a shop for months, Stein purchased it specifically for her trip. Although she bought it for superficial reasons — it’s bright and colorful, with a springy or summery quality — she later discovered an interesting synchronicity: It was produced around the time she was born.

Although Stein largely works on the computer and occasionally writes by hand, she’s begun to compose some poetry on the typewriter, and has noticed a different quality to the writing.

“It is challenging to use because the way my mind has been working on the computer is very different from how it works with a typewriter,” Stein said. “It’s like I’m doing less editing. I’m more aware of the choices I make in the poem itself. When I’m on the computer, it’s sort of automatic.”

Stein’s initial inspiration for integrating a typewriter into a writing project stemmed from her childhood. When she was around 12 years old, her dad put a typewriter on a desk in what Stein refers to as “a communal space” — or, more specifically, a landing at the top of the stairs that led to the house’s bedrooms.

One night, her dad inserted a sheet of paper into the machine. Then, pretty much every night before Stein and her sister went to bed, they’d each add a line to the story.

“It just became this kind of evening ritual, and sort of our family story that we were writing,” Stein said. “Everyone got to have equal say on how the story went. Nobody criticized your choices. It was my first exercise in really working collaboratively on something creative.”

Subsequently, as the Type Rider, Stein delivers the “typewriting experience” she grew up with to other people.

“It all kind of made sense because I’m always thinking about how to get people to connect with their creativity, so it seemed like a perfect time,” she said. “I thought, ‘Wow, but what if I did that for my 40th birthday, and wouldn’t that be a really great way to enter into the year?’”

A 39-foot RV, driven by her friend Grace Moore, has followed Stein through, as of her stop in Youngstown, six states. It’s their home away from home, she said.

However, it is significant to the project that Stein’s primary method of transportation — her bicycle — matched the old school, analog experience of writing on a typewriter. In addition, solitary time on the bicycle allows her to recharge between stops and reflect on her experiences.

Stein said she’s not sure yet how the final product, which she intends to publish, will end up.

“What it is to me right now is a series of life slices. I don’t really know how they’re going to go together, except that they are going together every day,” Stein said. “I just feel like I’m in the gathering stage. It might take on a different form when I’ve collected everything.”

Sherry Richert Belul, who lives in San Francisco and has known Stein since they met at a writing retreat in Los Angeles around 10 years ago, flew in for the event. Originally from Brookfield Township, she plans to accompany Stein for a few days of the trip.

Richert Belul said she loves the way Stein brings writing to the level where everybody can participate.

“I love that. It’s not, ‘I’m a writer. You’re not a writer,’” Richert Belul said. “Everybody’s a writer. All you need to do is sit down and write, and you can join in.”