Mad About the Arts celebrated their 23rd event Friday with a building full of observers and art in various forms. The McDonough Museum of Art hosted the event, offering a variety of sampled foods from prominent restaurants in the Mahoning valley, which were scattered throughout the gallery.

In the lower level of the museum, the Youngstown State University Jazz Ensemble performed, followed by the Sensations, a four-piece soul and pop group. As the music switched from swinging jazz to dance pop, people were either dancing or mingling with their fellow art enthusiasts.

Leicester Stovell, a horn player for the jazz ensemble, was playing at the event for the first time. He said he really enjoyed his experience and how all the different genres of art came together for one crowd-gathering night.

“This event shows that art is art no matter how it is created,” Stovell said.

The event is held every year to benefit the McDonough and WYSU, YSU’s public radio station. Tricia Perry, the funding officer for WYSU, said the yearly event is vital to raise money for both programs.

The entrance fee was $80 for the public and $65 for YSU students and staff, prices that may deter some from attending. Perry said because it’s a fundraiser for two programs, it’s essentially combining two events into one and paying $40 for each event, which is one of the cheapest prices available for an event like this. 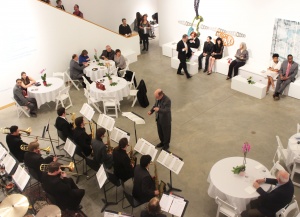 The ticket price did not appear to be a major barrier this year though, with moments of constrained movement throughout the museum. Leslie Brothers, director of the McDonough, said the atmosphere changes into something extraordinary when the Mad About the Arts season is upon the museum.

The extraordinary atmosphere change Brothers spoke of is something Perry attributes to the buildings infrastructure.

“There’s never a permanent exhibition, so there’s always a minimalist feel to the McDonough,” Perry said. “It’s really a perfect setting for the event.”

The exhibition displayed that day was the YSU faculty exhibition, Immersion. An event containing this amount of art every year may not always be the simplest to put together, but Perry credits the continuing tradition to good collaborations and timing.

“Now, it seems like everyone knows about Mad About the Arts,” Perry said. “It comes along every year when there isn’t much else going on so it’s noticed a lot more.”

Perry said the groups who catered the event have, for the most part, been with the event for the last 10 years and they’re always willing to participate. For Stovell, Mad About the Arts has a definite importance within the YSU community.

“It’s a benefit, so it’s important to help raise money for the two programs,” Stovell said. “As a student, it gives me the opportunity to be in a very professional atmosphere.”