Whether you are a vegetarian or not, it’s definitely worth a shot to try vegetarian cuisine. The Mahoning Valley has several great options for vegan, vegetarian and organic food, including Flaming Ice Cube, Aladdin’s Eatery and Ely’s To Go. These places are relatively inexpensive, delicious and have the advantage of consuming healthy food.

The Flaming Ice Cube, declared by VegNews Magazine to be one of the top 11-veggie burger destinations in the United States, is one of the most popular vegan joints in the Mahoning Valley area. In addition to veggie burgers, they also offer vegan soup, salad, sandwiches, organic quinoa bowls and desserts. All the soups and salads are made from scratch, and offer fresh and unique flavors.

But The Flaming Ice Cube didn’t start out as a café that caters to animal-loving vegetarians. In 1997 it opened up in Boardman as an aromatherapy store. Then in 2002 it opened its café and went on to open a storefront on Public Square in Cleveland.

“I believe in veganism and it’s something that I want to promote. For the planet, for people’s health and for the animals,” Michele Stratton-Barratt, manager of the Flaming Ice Cube, said.

Stratton-Barratt said the biggest obstacle is getting people to try it for the first time. A lot of times they visit the shop with a friend who is vegan or vegetarian, and after trying the food, they almost instantly they become hooked. She made the point that you don’t have to be vegan to enjoy vegan food, in the same way you don’t have to be Italian to enjoy Italian food, or Chinese to enjoy Chinese food.

“Our goal has always been to introduce people to veganism. So with our menu, we have tried to have things that people recognize, even if they’re unfamiliar with veganism. We try to be relaxed, unintimidating and serve delicious food. And hopefully people will eat it and be like ‘Oh, why am I eating meat? This is wonderful. I don’t miss the meat at all,’” she said.

Some of the menu items are designed to appeal to the palate of a meat eater, to the extent where vegetarians think they are being served real chicken or beef when they eat it for the first time. After eating the Hawaiian veggie burger, topped with grilled pineapple and an array of vegetables, it became clear why vegetarians think they’re being deceived with some menu choices. It was so hearty that, even though it’s made out of vegan ingredients, it doesn’t like it lacks meat.

To promote a peaceful lifestyle to go with healthy eating, Flaming Ice Cube sells bath bombs, candles, essential oils, scent sticks and a variety of gifts. The store also offers knitting classes, so there’s plenty of knitting supplies in the store that one can purchase.

“People who do eat meat still have a lot of options here. There are tons of vegetarian and vegan options, gluten free options. Our meats are all non-hormone injected. That kind of stuff is important to a lot of people,” Parish said.

Cory Factor, a worker at Aladdin’s, said their business is doing well because they have menu options that everyone can enjoy and because there isn’t a lot of competition for Middle Eastern food in Boardman.

“We’re lucky to have a nice corner of the market,” he said. 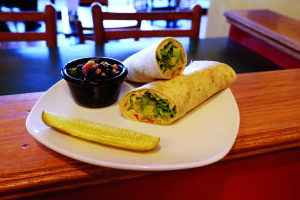 Parish said he has been a vegetarian for 16 years, and eating fresh and healthy food makes him feel more energetic and lighter on his feet. He said it can be costly to eat as a vegetarian and somewhat organic diet, but it’s doable.

“If you have the time and energy to seek it out and be smart about it, it can be affordable, because there are a lot of local farmers you can go to. It gets expensive to buy what you want when you end up just going to a grocery store,” Parish said.

They have regulars come in the store seeking both meat and vegetarian menu items, but a large portion of people call in and ask if they have vegan and gluten free options before they stop in.

Although I expected a rivalry between Aladin’s and the other restaurants in the area, they actually talked very highly of the other businesses, such as Ely’s, and support them.

“There aren’t enough options in the area; people seek out these things. We’ll have customers that we see a few times a week and they’re also going to be there a few times a week. When you’re in that tight community of people trying to do healthy foodstuff, it’s nice just to talk together, be together and share things. We’re the underdogs in a town full of pizza,” Factor said.

Down the road is Ely’s To Go, a vegan eatery that serves local and organic ingredients. Their slogan is “Food for a Lighter Footprint”.

The signs and graphics that decorate the walls of the store encourage patrons to eat locally, support local farmers and to care for the earth by choosing to eat vegan and organic food.

‘Vegan is not a diet. It’s a choice your heart makes.’

Despite this, Jim Pugh, the manager of Ely’s To Go, said they don’t see a lot of vegans.

“People are able to eat here no matter what. We cater to a diverse group and it’s a good thing because if we just catered to vegans, we probably wouldn’t be in business very long. Our food just happens to cross all lines, that’s all,” he said.

They support their advice to ‘Eat Local’ with actions, not just words, by purchasing their produce from five local and organic farms.

He said the most popular item was the BLT avocado sandwich, in which the ‘B’ stands for Boca instead of Bacon. Boca is a patty composed of soy and veggies. Pugh said he sees people changing their diets all the time when they realize the benefits of eating healthy.

“It’s not just a diet, it is a way of life and people are adopting it all the time. Even if they aren’t going 100% percent vegan, they are leaning that way more and more. It’s not that big of a step from vegetarian to vegan. There are so many alternatives now to meats, cheese, and dairy. It’s not as difficult as people think it is,” Pugh said.

He mentioned that there are people who are compassionate about animals and the earth and choose to eat vegetarian based on that aspect, but then there are some people who have to omit meat because of dietary needs. That’s the case for Christina Yovick, advisor for the Emerging Leaders Program.

She wasn’t always an herbivore. After having severe stomach pains, she decided to switch to a vegetarian lifestyle to see if it would soothe her pain. She eventually discovered it was a gall bladder problem that was causing it, but she still never went back to eating meat.

“When I stopped eating meat I felt better. It wasn’t hard because I was really motivated and really excited about it. I often joke that I quit eating meat ‘cold turkey,’” Yovick said.

She spoke to some PETA representatives to get more information on living a vegetarian lifestyle and they told her about the chemicals that are injected into animals.

“[With] the whole ‘you are what you eat’ thing it’s like, well, if they’re injecting these chemicals into animals, and you’re consuming them, then perhaps that could be a reason you aren’t feeling well,” she said.

She’s a self-proclaimed ‘bland foodie’ and likes plain things so she sticks with the same vegetarian recipes, but she said there are tons of resources out there to help people who are transitioning to the lifestyle. She highly recommends Red Robin’s plain Boca burgers, especially for people who don’t love vegetables.

With so many options in the Mahoning Valley area, anyone can enjoy a vegetarian diet, or even just organic and local food every now and then.