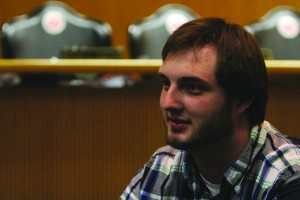 This is it. This is really it. The last issue of The Jambar that I’ll ever be associated with. It still hasn’t sunk in yet, but I’m sure it will.

I still can’t believe that I’ve done everything I have in the past four years. I changed majors twice and I’m still getting out in four years. I played Quidditch, Ultimate Frisbee and killed zombies with the people that have become some of my best friends. I’ve gone to New Orleans, Chicago, Columbus and Cleveland for work and recreation, even if the line between the two has been blurred at times. I’ve blanked out on entire months of time, apparently — I still feel bad about that, Fiona. I’ve played baseball and football while on the clock.

And I’ve had the pleasure of working with some of the hardest working, passionate and entertaining people I’ve ever met.

I’m sad to leave this place. And also a little bit scared. This is uncharted territory for me. I’ve always been told what the next step is and how to make it.

Apply to college. Pick a major. Get a job in college. Learn something about how to do the job so I can function in the real world.

But now, I know what the final step is, but what happens when I put my foot down and start walking? I don’t know and it scares me. I have to pray that I’ll make the right choice and, as someone who hasn’t prayed since middle school, I’m petrified to do that.

I know what I want to do. I think.

I want to travel and write. I want to cover sports. I want to write profile pieces and meet fascinating people on the way. I want to write movies and novels and short stories and memoirs, although these may be the least realistic things I want to do.

So maybe I don’t know exactly what I want to do next. But it involves writing, so I’ve got that part straightened out at least.

No matter what happens next, I know that I’ll always have my time at YSU and The Jambar. I can’t imagine doing what I’ve done with anyone else.

Cassy, there’s no one else I’d rather run a newspaper with. After seeing everything that happened, I’m really glad that I wasn’t picked to be EIC. You’ve handled everything way better than I could ever hope to, and I’m sorry that I didn’t do more to help you out this year. Hopefully, you end up with that job at Food Network or Amazon.

Joe, no one knows sports like you. And no one knows how to pull an article out of their ass like you. There have been times where I’ve found you more annoying than anything, but it’s always been amazing to watch you work. Whether you’re putting together a half-hour documentary or pulling off a story in the four hours before deadline, I wish I could produce some of the stuff you have.

Frank, never would I have imagined that you’d fall so naturally into the role you had this year. For someone that had like four months of experience before being moved up to news editor, you’ve done a damn fine job. I’m also putting you ahead of Liam in an attempt to humble him a bit before he starts going on power trips.

Liam, you’ll be just fine as EIC. Just remember that we write for an audience that doesn’t necessarily appreciate words like “disputatiousness” and “proclivity.” Also, the small stories are just as important as the big ones. I swear if I come back and the office is painted green and has an Irish motif, I will not be happy.

Amanda, it’s up to you and Cassy to keep Liam in line next year. You may be a columnist, but keep in mind that our last full-time columnist went on to be EIC. I really don’t know what I’ll do without being able to complain to you.

Alyssa, it’s up to you to make sure that Liam’s hatred of Batman doesn’t escalate into office policy.

Rachael, you won’t be at The Jambar to help Alyssa, but I know you’d help if you were. I think you’ve got a great future as a writer, especially if you can write for magazines.

Gabby, it’s up to you to make the A&E page awesome. I know you can do it and I think if you keep at it, a spot as EIC could be in your future.

Steve, I’ll miss your jokes. And I know Sara will miss you, too.

Jordan, you’re a good copy editor despite the sometimes awful headlines. “Russian for Greatness?” Really? We all expect better from you next year. Maybe you can spend your three-month break from The Jambar to work on your headline writing. Or play The Sims. Either one works.

Anthony, that’s what she said?

Everyone else at The Jambar, I may not have mentioned you by name, but you’re all family to me. You’ve all played a part in this journey and like I said earlier, I’ve never met a more passionate, hard-working group of people. We’ve all come so far from that first issue of the fall and I’m really proud of all of you.

Now, on to the non-Jambar people.

Mom and Dad, I know I’ve told you before how thankful I am for everything you’ve done for me the last four years, but I really can’t thank you enough. And Dad, the headline is for you.

Fiona, I’m really sorry about those four months of freshman year that have been completely erased from my memory. But since then, you’ve been the best friend I could ever ask for. Especially considering the BS I’ve put you through.

Rodger, I wish I hadn’t fallen out of contact with you. Hopefully, I can get this job in Columbus and we can be summer buddies. I fully expect to see you out on Saturday.

Schaefer, I thought I told you to stop following me.

Mary Beth, you’ve been my mom in Youngstown outside of the office. You’ve helped me become the journalist I am today, and I can’t thank you enough. I’ve also never worn gym shorts to class.

Mary, you’ve been my mom in the office. I’ll miss you when I’m gone. Is there any possibility I can hire you to follow me from job to job and bring me food at wherever I’m working?

Tim Francisco, I maintain that your magazine writing class did more for me in terms of writing than any other class at YSU. Your Brit Lit class isn’t as influential, but it’s still pretty cool.

If there’s anyone I forgot, I apologize. Just assume I said something really nice and/or inspirational.

You’ve all helped me get to where I am today. Hopefully you all play a part in wherever I go next.

Now, I just have to figure out where I’m going next.