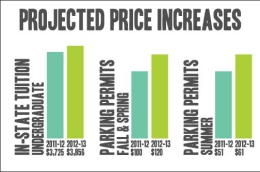 Youngstown State University may raise tuition this fall by 3.5 percent — the maximum allowed by state law — for the third consecutive year.

The board of trustees’ finance and facilities committee carried the motion at its meeting in Tod Hall on Tuesday. The added costs will be approved should the board formally adopt the measure on Wednesday.

An additional $130 will bring in-state undergraduate tuition costs to $3,855.96 per semester, or $7,711.92 for an academic year. Regional and non-regional students will also see tuition increases of $130.

Graduate students’ tuition would be raised by $173. Ohio residents would pay $5,128.44 per semester.

Since fiscal year 2010, undergraduate tuition has jumped from $3,360 per semester to $3,725, a 10.8 percent increase. Neal McNally, budget director, attributed the increase to the fifth consecutive year of state funding reductions.

In 2001, state subsidies nearly matched tuition revenues at YSU. In fiscal year 2013, tuition must carry around 75 percent of the weight. Based on tuition rates, YSU is still the most affordable four-year, comprehensive public university in the state. Shawnee State University and Central State University charge less for tuition but receive additional subsidies because they serve more specific demographics.

The trustees also carried a motion to raise parking permit prices by $20, to $120 per semester. An additional $10 will be added to summer passes, making them $61.

“We’re not completely throwing it out,” McNally said. He added that future financial problems may arise that could be solved by the fee. The university estimates nearly $200,000 in additional revenues from student parking permits, a 10.5 percent increase.

McNally also unveiled the fiscal year 2013 operating budget at Tuesday’s meeting, which the board carried unanimously. The university’s operating budget will shrink by 1.3 percent, totaling $178.65 million.

The general fund will be supported largely by student tuition; an expected 72.4 percent of $156.3 million will come solely from tuition.

However, these figures assume that enrollment levels will remain steady. A projected 1 percent enrollment increase during the last fiscal year became a 3.4 percent official decrease that fall semester, resulting in a $7 million operating deficit.

Contingency funds were set aside to soften the financial impact. McNally said a 1 percent change in enrollment equates to roughly $1 million in additional revenues or deficits, depending on the direction.

Scott Schulick, trustee and chairman of the finance and facilities committee, said he is concerned over the size of the contingency fund, and the board would be more comfortable if additional plans were in place in case the university experiences another surprising enrollment decrease.