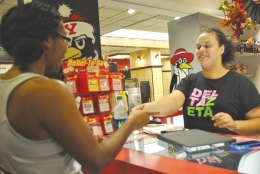 After five months of waiting, Youngstown State University junior Melissa Wasser received the phone call she had been anxiously anticipating.

She received the position of YSU student trustee.

Since the end of Ryan Meditz’s term on April 30, Joshua Prest, now in the second year of his student trustee term, had been the only voice representing students.

Prest endured a similar wait last fall as the semester began and the announcement still lagged. Prest entered the position on Sept. 20, 2011, and Wasser did so on Thursday.

He said the anticipation can be overwhelming.

Wasser and Eric Shehadi were the only two applicants for the position this year.

Wasser, a double major in political science and philosophy, said she looks forward to representing students on the board of trustees as she steps into the two-year position.

“I feel like they always say there needs to be more transparency in government,” Wasser said. “Maybe the students don’t feel comfortable going to a regular board of trustees member, but maybe they would feel more comfortable having two students on there.”

Student members of the board of trustees take part in making major decisions for YSU, though they can only vote on committee decisions, not general assembly.

Though Prest, also a political science major, serves on the board now and has another year, Wasser expressed frustration at the under-representation since Meditz’s term ended.

“It’s kind of annoying,” Wasser said. “I know that appointments do take a long time; they have to pass through a lot of channels. I completely understand it taking so long. But it was kind of weird to apply, turn it in and then they say, ‘Oh, you’re going to wait a few months before it happens.’” Meanwhile, Kasich announced student trustees for eight other public universities in Ohio between April and August.

The delay on the announcement cut into Wasser’s term as student trustee. Her term will still end April 30, 2014.

The wait isn’t the only thing that disappointed Wasser. The lack of interest in and competition for the position dismayed her as well.

“I think it’s kind of sad that out of, what, 15,000, now 14,000 students, two applied,” Wasser said. “I don’t know if people are just apathetic and they just don’t want to be involved, or maybe they feel like their voice doesn’t matter.”

Whatever the answer, Wasser looks forward to the next two years as a voice for YSU students. She feels her diversity of activities and involvement will give her a comprehensive view of what students want. Wasser attended her first meeting as a student trustee on Tuesday, when the board discussed finance.