Ohio Republicans wanted Youngstown State University President Jim Tressel to challenge Democratic Sen. Sherrod Brown in the United States Senate election this year, according to a report that first surfaced on the Washington Examiner on Jan. 11.

Tressel signed a one-year contract on Dec. 6, which extended his contract with the university until June 2019.

According to a report by The Jambar on Jan. 11, Tressel said his contract extension is exciting because there are a lot of things that the university is currently in the midst of.

Tressel said in a tweet on Jan. 11 that he has no intentions of running for senate and he will continue his work at YSU. 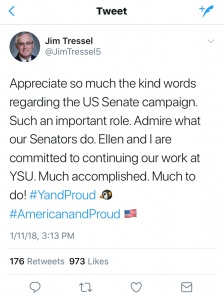