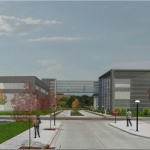 Youngstown State University will look very different in a few years if the plans laid out by President Jim Tressel on Tuesday come to fruition.

Tressel said the demographics in the five-county area show a decline in college-aged students. He said that, combined with steadily declining state funding, requires the university to reach outside of the immediate area to continue to thrive.

“To do that, we really believe that they have to have a great first impression as they come to the campus,” Tressel said. “They have to feel it’s a vibrant place; that there’s things to do.”

He said this was the driving force behind these projects to improve the aesthetics and activity along the perimeter of campus.

Tressel began by talking about the renovations to Melnick Hall, which houses the YSU Foundation and WYSU, and the movement of the Honors College to Fok Hall, formerly the Alumni House.

The long-awaited improvements to Wick and Lincoln Avenues are scheduled to begin this summer running through Nov. 1. Wick Avenue will be reduced to three lanes with underground power lines and improved lighting and greenery. Lincoln Avenue will undergo a similar transformation with parking reduced to the south side of the avenue instead of both sides.

Mike Hripko, associate vice president of research, intends to submit a federal grant application on behalf of the university and partners, including Mercy Health and the Western Reserve Transit Authority to make improvements to Fifth Avenue. Tressel said they hope to create a boulevard with retail space connecting Mercy Health to Mill Creek Park.

He mentioned the proposed Enclave student apartment complex, which Tressel said might be pushed to the fall of 2018 because of clearances with the state.

Also announced was a student apartment complex on the corner of Wick and Rayen Avenues, where the St. Vincent DePaul building currently stands. NYO Property Group is undertaking the project, which is intended to be completed for fall of 2017.

Moving over to Fifth Avenue, the developers behind the University Edge apartment complex, opening this fall, will be beginning Phase II of the development, adding a 220-bed unit to be completed by fall 2017. They would also like to construct a retail corridor along Fifth Avenue where Smith Hall currently stands.

“So we’d have a nice little village there with retail,” Tressel said. “We think it would be an exciting thing.”

He also mentioned the intent to have Barnes and Noble take control of the bookstore this fall with an eye towards building a standalone bookstore at some point in the future.

“We think we can really increase and enhance the bookstore’s capabilities,” Tressel said.

He also formalized plans for a student success center in Jones Hall that would connect the building’s third floor to the library’s third floor via a 6,800 square foot walkway.

“One of the things that keeps coming up [among alumni] is that Jones Hall to them was the flagship,” Tressel said. “They can always talk about what floor they were on when they studied for this test or when they met their girlfriend.”

Tressel said they want to create a one-stop support center with peer mentors, academic advisers, mental health counseling and the Center for Student Progress. This would free up space in Kilcawley Center and allow for a potential new student center in the future.

“Our student center is a little bit aged,” Tressel said. “[This] will free us up to get a little bit creative.”

The final major project mentioned by Tressel was the Mahoning Valley Innovation and Commercialization Center, which would provide a laboratory for YSU, Eastern Gateway Community College, OH! Wow, Youngstown Business Incubator, local public schools and other entities. Potential funding for the project would arrive with the next state capital budget in 2018.

“We’ve got to prove to the state that the confidence they had in our idea, we can back up with our fundraising,” Tressel said.

Other projects included a wall commemorating winners of the YSU heritage award to the north of the basketball and volleyball courts near Elm Street and a facelift coming to the Wick Avenue parking deck this summer.