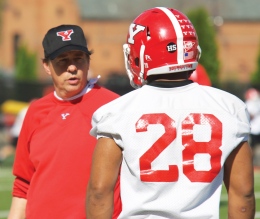 Marlee, Wolford’s daughter, had the flu and began throwing up. Wolford’s wife, Melinda, noticed how Tresey helped clean up the mess. Most guys, she said, would flee the scene.

But now, his main duty is to turn around the Penguins’ defense.

The Warren native is back in the Mahoning Valley.

“Well, we are undefeated, so it has been outstanding,” Tresey said. “It’s been great to reconnect with family and being around the people I grew up with. It’s been really good.”

Tresey spends spring practice sessions implementing his new defense, and Wolford said the team is still getting used to Tresey.

“I think, at first, the defense was in a little bit of shock with the coaching change and the personality change,” Wolford said. “I think they have a better understanding of what is expected. Hopefully it will rub off, and they will play that way, too.”

Tresey’s last stop was at UCLA, where the numbers weren’t the greatest. Tresey’s defense allowed 312 first downs, 5,840 yards and 439 points in 14 games.

But Wolford said he doesn’t always look at numbers.

“He is going to be on you no matter what you do, regardless if you make a stop,” Stanton said. “You still have to run off the field, opposed to last year when he was happy we got the stop, but he wasn’t really paying attention to anyone going off the field. Coach Tresey comes to me and says after every play to make sure everyone runs off the fields.”

Tresey said since he has been able to evaluate his team on the field, he has a better understanding of who can contribute for the Penguins.

“We expect Aronde Stanton, [senior defensive lineman] Nick DeKraker and [senior defensive end] Josh Fenderson to be pretty solid players,” Tresey said. “We got a couple young kids, [redshirt freshmen defensive linemen] Steve Zaborsky and Emmanuel Kromah — kids that we redshirted last year that can be good football players for us down the road and give us some good depth.”

Stanton said the defense is getting better, but still has a lot to learn.

“We learn what we learn that day, but we are learning new stuff every single day,” Stanton said. “The days that we don’t have practice, we are still meeting and learning new stuff. We just have to pick up on everything.”

On the field, Tresey has a very fiery and intense personality, much like Wolford.

“I don’t yell nearly as much as he does, but when I first got here, I probably did,” Wolford said. “He has just got an intensity and a passion to him, and an attention to detail. I need someone on that side of the ball that has some energy and some juice, kind of like myself. I think we have that.”

With years of coaching experience at Bowl Championship Series schools, Tresey said he has learned a thing or two during his career and is excited to put this knowledge to use with the Penguins.

The BCS is the college football system that matches up the top 10 ranked teams in the NCAA Division I Football Subdivision in bowl games.

“You have to practice and operate yourself mentally and physically at a very high level,” Tresey said. “You have to know how to live off the field, as well as on the field, so that you fuel your body so it can perform at its optimal level. When you hit that field, you hit it at 100 miles an hour.”