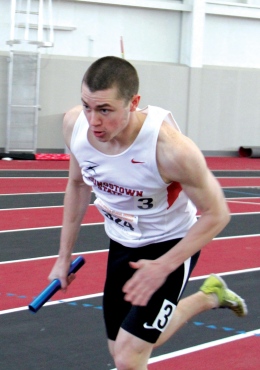 The Penguins’ performance at the adidas Raleigh Relays this past weekend was one to remember.

“It is probably one of the best outdoor meets in the history of the program,” said Brian Gorby, Youngstown State University’s head track and field coach. “We never had people finish in the top five or six in the 100 and 200.”

Junior sprinters Mike Davis and Tarelle Irwin had standout days for the Penguins.

Irwin said running against competition from the Atlantic Coast Conference and the Southeastern Conference gets the team ready to run.

Davis said it takes a few meets to transition to the outdoor season. The team finished its indoor season at the end of February.

“It was different,” Davis said. “Indoor, there is no wind, no weather. It was all right. I never run good at the beginning of the season.”

Irwin said he prefers the outdoor meets because that’s where he is more comfortable.

“The track is bigger,” Irwin said. “It is a place where we can showcase how good we are when we make that transition. Indoor, everything is a lot shorter, so once you go to outdoor, that is where everything happens.”

She said she was happy with how the team performed, especially against the level of competition in the meet.

“As a team, we have a little bit to work on,” Jarrett said. “A lot of people progressed from the indoor season, so it was a good first meet. And with the competition we faced, it makes us stronger, and it makes us better.”

Also on the women’s side, junior Samantha Hamilton continued to run at a high level.

“The apex of the meet was Samantha Hamilton running 16:34 in the 5K, and she was just phenomenal,” Gorby said. “To have her, when her best time last year was 17:50, and have her drop 1:20, that’s definitely what we were kind of excited about.”

Hamilton said she felt good in her first outdoor meet of the year.

“I kind of left off right where I ended with indoor, which is good,” Hamilton said. “On the distance side, we are well above where we should be right now. It was perfect weather for distance Friday night.”

The Penguins return to action on April 13 in the Northeast Ohio Quad in Akron.