Touch the Moon Candy Saloon is a nostalgic candy store located in downtown Youngstown. The candy store carries a wide variety of modern and old-fashioned treats, and proceeds go towards individuals with disabilities in the Mahoning Valley area.

It was founded by Jimmy Sutman and business partner Joe Gallagher in 2005.

Jim Shagla, a store manager, said they try to keep a large assortment of retro candy and hard to get candy. He said some candy comes from overseas.

“A lot of the candy bars are retro, and the other things too that we have, the hard candies that have been around a long time,” Shagla said. 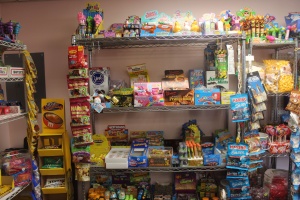 Shagla said the candy store gets a broad spectrum of customers from all over, especially children. He said on Saturdays, the candy store opens up in conjunction with the OH WOW! center, so it gets an overflow of very young children from the science museum.

Shagla said people should visit the candy store for the nostalgia.

Brian Lyons, a recent graduate from Youngstown State University works at city hall in Youngstown. He said the candy store is a quick stop for him after lunch when he needs something sweet.

“It’s like, right there and it’s perfect,” Lyons said.

Lyons said once he got to work downtown and realized the candy store is there, it was like a gold mine. He said all of the retro candies are what a lot of people loved in the past.

“I think they’re bringing them back and making people love them now,” Lyons said.

“You have great places to go to get a little sweet in your system like One Hot Cookie, but this place is like, the place to go,” Lyons said. 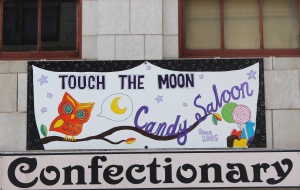 Lyons said the Buckeye Popcorn, which is made by Purple Cat, is his favorite thing to buy.

Emerson Woodyard, a political science major and economics minor at YSU, said having a good price and a good selection within a candy store helps them as a business. He said it’s cool that old-fashioned candies are being brought to the Youngstown area.

“Having the diversity and the selection helps quite a bit,” Woodyard said. “Having something of that type and as successful as it is, is certainly beneficial for the city.”