The B&O station has been hosting the Zombie Crawl for the past seven years. The Zombie Crawl is a beer crawl that branches across all local bars in the downtown Youngstown area. Amy Komara, event coordinator for the B&O Station, explains how people can get involved in the Zombie Crawl. 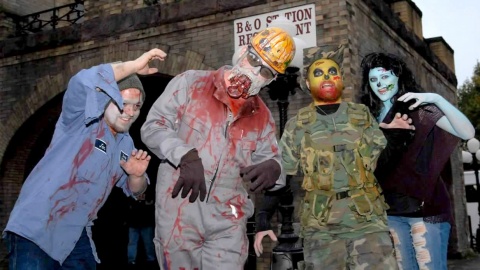 “Everyone registers at the B&O Station. After you register, there is a professional FX makeup artist who can do your ‘zombie makeup,’” Komara said. “The price for the makeup ranges from 10 dollars and up. The first 150 people to register for the Zombie Crawl get a t-shirt.”

All local bars downtown are offering food and drink specials in conjunction with the Zombie Crawl. Jeff Kurz, co-owner of The Ryes Craft Beer & Whiskey and Imbibe Martini Bar, has come out with two special drink menus for the Zombie Crawl.

“We will be offering at Ryes Craft Beer & Whiskey a Halloween Cocktail Menu including Corpse Reviver Prohibition Cocktail, Ryes and Dine Boilermaker, Bloody Brain Shot, Pumpkin Beer and a debut of new ghostly named beer and ghostly named cider,” Kurz said. “At the Imbibe Martini Bar our special menu consists of the Trick-or-Treat Martini: Let us surprise you with one of our candy inspired martinis, a Carmel Apple Martini, Candy Corn Martini and Pumpkin Beer.”

The B&O Station will be offering a trolley that will take patrons to the locations participating in the crawl. Most bars are places along West Federal Street, but there are a few located a little farther from the B&O station, like MVR and the Royal Oaks.

This year instead of doing a charity, the Thrill the World dancers are doing a collection with Second Harvest Food Bank. People are welcome to bring canned goods and non perishable food items to donate.

Along with the Zombie Crawl, Suzie’s Dogs and Drafts is presenting a free concert by The Zou and hosting a Halloween costume contest.

The Zou is a locally formed band that has been performing the Halloween show at Suzie’s for the past three years. Khaled Tabbara, lead singer of the band, said they have a spooky show in store for everyone coming.

“The environment is fantastic. What makes the show special is it’s not just a common set of music. We have the chance to do Halloween themed covers,” Tabbara said. “We like to cover some Rocky Horror Picture Show hits, other Halloween songs and some of our more spooky original songs. We also dress up in costumes to set the vibe.”

According to Tabbara, downtown Youngstown is the place to be Saturday. After the Zombie Crawl there will be awesome music at Suzie’s and a costume contest everyone can get involved with. The bands will be playing some great Halloween-inspired songs, and it will get anyone in the mood for Halloween.

The Zombie Crawl is all ages, but it should stay focused on 21 and over. All bars will be carding at the door. When registering for the Zombie Crawl, you must have your ID present, or you can’t register or get on the trolley.