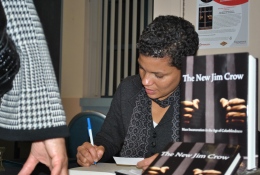 One decade ago, attorney and author Michelle Alexander was put in jail for participating in a sit-in in California. She joined a group of protesters who disagreed with a bill that would try juveniles as adults.

Alexander and the other participants were chanting slogans from their jail cell and “quite frankly, having a good time,” she said.

A silence fell over them, however, when they heard agonizing cries from a woman in the cell next to them.

“Those people may never get to see the outside of that cell again, never get to hold their kids again, and it really hit home,” Alexander said.

Since then, Alexander has investigated the inner workings of the mass incarceration system.

On Tuesday night, Alexander visited the Youngstown Historical Center of Industry and Labor to discuss “The New Jim Crow: Mass Incarceration in the Age of Colorblindness.”

“When I wrote the book, it was my greatest hope and prayer that there would be open hearts and minds that would see this book as an awakening about the mass incarceration system like I did about a decade ago,” Alexander said.

Alexander also talks about the prison system being driven by money and the difficulties faced in changing the system.

“We can’t engage in meaningful action unless we know the history behind what we are fighting for,” Alexander said. “Hopefully, we will have an awakening that can bring an end to this caste-like system.”

Alexander said she thinks that prison systems are an issue everywhere.

Sybil West, board member of the Mahoning Valley Organizing Collaborative, grew up in Youngstown, but these issues are more apparent to her now because of what she witnesses her 30-year-old son going through.

“The whole book hit me personally. When I was younger and would have said some of these things, people would have thought that I was crazy or paranoid. She just brought a pen to paper and said everything I wanted to,” West said.

West said she recommends that all members of law enforcement or people in positions of power read this book to see how African-Americans are being unfairly targeted.

Yulanda McCarty-Harris, director of the Office of Equal Opportunity and Diversity at Youngstown State University, introduced Alexander as her “sister.”

“She is someone that is interested in giving a voice to those who are oppressed and don’t have a voice, so I bond with her in that way,” McCarty-Harris said.

McCarty-Harris said Alexander has made an impact as an attorney and an author.

“Just looking at her biography and seeing what she does inspires me,” she said. “For a woman to accomplish what she has, I consider it breaking the glass sea.”

Sherry Linkon, co-director of the Center for Working-Class Studies at YSU, is a member of the MVOC-CWCS book club. The club recently finished Alexander’s book, and most club members attended Alexander’s presentation.

“We’ve been gathering and having fabulous conversations. It’s not just what this book says. In order to talk about it, you have to talk about race in America,” Linkon said.

Linkon added that the book is rather troubling, but Alexander portrays the issues in a powerful, persuasive manner.

McCarty-Harris and Alexander agreed that criminals are not given the chance to reinvent themselves.

“We don’t say that we condone crime, but we want a system that helps them. Where are their support systems? Not even for when they get out, but should they even be in?” McCarty-Harris asked.

Alexander said that a great deal of imprisonment issues have to do with the perception of felons.

“The explosion of incarceration has less to do with crime and more to do with the way that we respond to people who are criminals,” Alexander said.

“I know it says [employers] don’t discriminate on job applications, but when someone says that they’re a felon, how much of a chance do we really give them?” McCarty-Harris asked. “I commend organizations that give people a second chance. That’s what it’s about.”

McCarty-Harris said she thinks help is the most important thing to give to people in this kind of situation.

“When someone says, ‘I’m being oppressed,’ it’s not our job to say, ‘Are you sure?’ We must help them through it,” McCarty-Harris said. “The fact is that some of them are definitely trying to turn their lives around.”